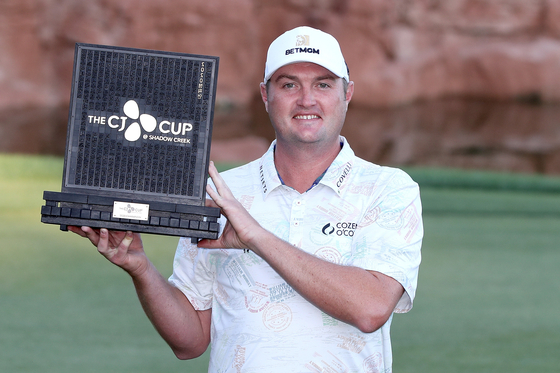 Jason Kokrak of the United States poses for a photo with the trophy after wining the CJ CUP @ SHADOW CREEK in Las Vegas, Nevada on Sunday. [GETTY IMAGES FOR THE CJ CUP]

By shooting a bogey-free round of eight-under-par, 64, on the final day, Kokrak finished the tournament at 20-under-par, 268, two shots ahead of runner-up, Xander Schauffele, also of the United States.

With notable names like Schauffele, Jason Day of Australia, Ryan Palmer of the United States and many more ranked toward the top of the leaderboard, not many expected that Kokrak would sign his scorecard as the lowest in the field after the four days.

Looking at his performance on the final day, there’s no doubt that he played his best round. Having golfed at Shadow Creek a little more than the other players, Kokrak started to lower his score immediately with a birdie on the par-4 second. Then with four straight birdies from the par-3 fifth and the par-3 eighth, he slowly got himself up to the top of the leaderboard.

With back-to-back birdies on the par-4 10th and 11th, Kokrak extended his lead and by finishing the last hole, the par-5 18th with another birdie, the 35-year-old took the title.

With the victory, Kokrak received prize money of $1.75 million and 500 FedEx Cup points, which moves him up to fourth in the FedEx Cup Standing. This is a long-awaited victory for Kokrak as it is his very first win on the PGA Tour since he turned pro back in 2008.

“It’s still setting in, so very excited,” Kokrak said. “I couldn’t be more pleased to get my first win, nonetheless here in Vegas. Part of the MGM crew and the rest of my sponsors obviously. Pretty special win. Ten years out here on the PGA Tour’s been a long career so far, so to wait so long for my first win, it’s a pretty special thing.”

Kokrak joined the PGA Tour in 2012 season by finishing fourth on the money list on the Korn Ferry Tour in 2011. In his rookie season, he’s made 10 cuts out of 23 tournaments he competed in, finishing No. 178 on the FedEx Cup points standing.

Practice definitely paid off and Kokrak credits his time on the course ahead of the tournament as helping him win.

“I played quite a few rounds here at Shadow Creek so I know the greens pretty well, I know kind of the little intricacies of this place,” Kokrak said after the round. “Not like some of the local caddies, but it is definitely a place that I feel comfortable at. I played 20, 25 rounds here before even playing this tournament or before teeing it up, but it plays a lot different. The greens are always this fast, but they’re never this firm.”

Kokrak said that he’ll celebrate his victory by having “a nice bourbon and a nice bottle of wine and a nice dinner with my team.”

The CJ Cup is normally being held at Nine Bridges in Jeju Island but this year, it was held at Shadow Creek in Las Vegas due to the coronavirus. However, that didn’t mean that Team CJ missed out.

Just as with any other years, a number of Korean golfers, whether they're sponsored by CJ or earned their spot through their wins on the KPGA Tour, competed this weekend. However, they weren’t able to leave an impression as An Byeong-hun was the bet finisher at tied for 42nd, with a four-round total of three-under-par, 285.

The PGA Tour will continue its season with ZOZO CHAMPIONSHIP @ SHERWOOD in Thousand Oaks, California, starting from Oct. 22 to 25.