Once No. 2 on the Kosdaq, Helixmith could now be delisted

Once No. 2 on the Kosdaq, Helixmith could now be delisted 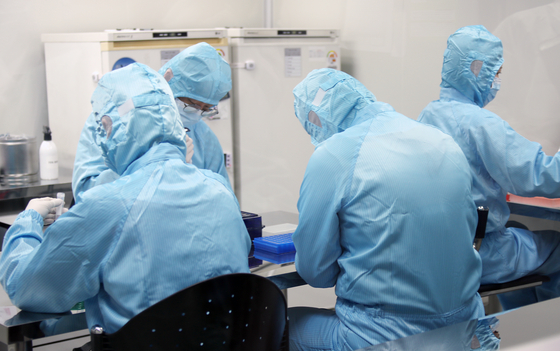 
Once the No. 2 company on the Kosdaq in terms of market capitalization, bio firm Helixmith is on the verge of being delisted after it lost a huge amount of money over the last five years through a series of risky investments.

Helixmith officially notified investors after the market closed on Oct. 16 that the company has invested 264.3 billion won ($232 million) in 68 "insufficient assets" since 2016, including private equity funds, bonds of private companies and derivative-linked securities. The amount is 60 times the total sales for the bio company last year, which was 4.5 billion won.

The total accumulated losses were not small.

The company also invested 7.4 billion won in a real estate investment trust and lost 31 percent of the principal investment.

It lost all of its 2.5 billion won invested in the Exotic German Heritage derivative-linked securities, which recorded minus 44 percent in yields.

“We cannot rid out chances that more investments, apart from the already troubled assets we own, could suspend repayments,” the announcement on Oct. 16 said.

The stock price of Helixmith has been nosediving ever since the announcement, dropping 9.06 percent on Tuesday to reach 19,600 won.

This also puts its plan to increase capital through the issuance of new stocks at risk. The company was pushing to issue new stocks worth 286.1 billion won, almost half of its total market capitalization, to avoid being entered into administration by the Korea Stock Exchange.

The bio company’s loss before taxes is at 54.4 percent of its owner’s equity. Under Korean law, if this ratio exceeds 50 percent for an accumulated total of two of the last three years, a company enters into administration.

Helixmith's retail investors might be held hostage by the company and pushed to purchase new stocks, according to analysts, considering that the company’s largest shareholder CEO Kim Sun-young said he would not participate in the capital increase. 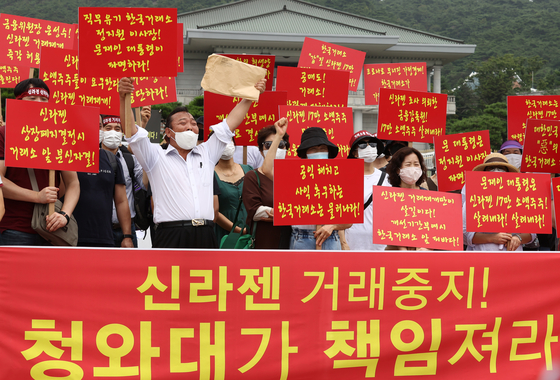 Retail investors in bio company Shillajen protest in front of the Blue House in July, demanding the government resume trading of its stocks. [YONHAP]


The bio company could fall into even deeper liquidity problems once it enters administration. It will not be able to receive new funds, not to mention the pressure from financial regulators to extend the maturity dates or pay back loans it has borrowed. In the worst-case scenario, Helixmith will be delisted.

Offsetting losses with operating profits might not be a viable solution for the bio company. Helixmith recorded 4.5 billion won in sales last year but suffered an operating loss of 38.3 billion won. In this year's first half, Helixmith's sales barely made it to 2.3 billion won.

Even though the company is technically a bio company, most of its sales depend on health supplements made with herbal extracts, instead of new medicine. The gene therapy Engensis, developed by the company, failed to pass Phase 3 trials last September.

Helixmith is not alone, say analysts, as they see many bio companies in Korea trying to make short-term profits out of financial investments rather than focus on developing new treatments.

“The bio company might repeat the path of Shillajen, which was forced to stop trading on the stock market,” said an official from Helixmith.

Shillajen is a bio company that developed a treatment for liver cancer. The company was also once No. 2 on the Kosdaq, with a market capitalization of 10 trillion won. Shillajen, however, is currently under review to be delisted amid allegations that the company’s executives hid from investors that its cancer treatment failed to receive approval for clinical testing by the U.S. Food and Drug Administration last August.

“We feel regretful and apologetic to investors by making a bad decision to invest in high-risk investments, which has resulted in huge losses. However, not all investments suffered losses. We will scrutinize future investment and retrieve back as much as possible,” he added.