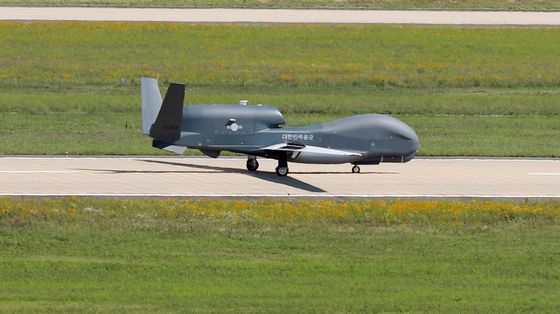 A South Korean Air Force Global Hawk taxis on a runway at an airbase in Sacheon, South Gyeongsang, in June after returning from a reconnaissance mission. [YONHAP]


South Korea will receive a cutting-edge system used to analyze imagery taken by its Global Hawk drones next month from the United States, as well as 16 more F-35A fighter jets by next year, Seoul’s arms procurement agency said Tuesday.

In a report it submitted for a parliamentary audit on Tuesday, DAPA said the devices would be brought in by December following delays incurred by Covid-19 and prolonged negotiations with U.S. manufacturers and the government.

Seoul last month received its fourth RQ-4 spy drone from the United States, the last of a 2011 purchase from Washington.

As one of the most expensive and sophisticated unmanned aerial surveillance systems in use, the Global Hawk is equipped with high-resolution imaging devices and radars that enable it to detect objects as small as 30 centimeters (11.8 inches) from an altitude of 20 kilometers (12.4 miles).

From such an altitude, the drone can operate between 38 to 42 hours and survey a distance of up to 3,000 kilometers, putting most of Northeast Asia within range of its surveillance capabilities even when it is in South Korean airspace.

With its acquisition of the RQ-4 and its new imaging system, Seoul will be able to independently obtain important aerial reconnaissance data from the North Korean interior that it has relied on Washington to provide.

Aerial spy planes South Korea currently operates are limited to South Korean airspace, so their visibility does not extend to areas north of Pyongyang, which left key nuclear and missile sites like the Yongbyon nuclear complex or Tongchang-ri launch site out of range.

DAPA further revealed Seoul was upgrading the identification friend or foe (I.F.F.) system installed on the RQ-4 to Mode 5 in line with U.S. requirements. I.F.F. is a term used to identify sets of equipment — including transponders, control panels and encryption devices — that enable military aircraft, naval vessels and antiaircraft systems to distinguish between friendly or hostile targets.

Along with advancing its intelligence capacities with its new unmanned aerial vehicles, Seoul has also been rapidly augmenting its fleet of latest generation fighter jets.

DAPA said in its report the country has so far received 24 of the 40 F-35A jets it bought from the United States in a 2014 deal worth $7.4 billion, and would receive the rest through next year.

The jets, built by Lockheed Martin, will be the mainstay of Seoul’s aerial fighting capacity, along with the domestically built KFX jet currently under development.

Seoul last month said once it receives all 40 F-35As, it will launch the next phase of its aerial procurement plan, in which it will double its fleet of F-35 jets by acquiring 20 more A variants and 20 F-35B jets that will operate on the country’s first aircraft carrier.