Posco and two others to develop smart tree waterer

Posco and two others to develop smart tree waterer 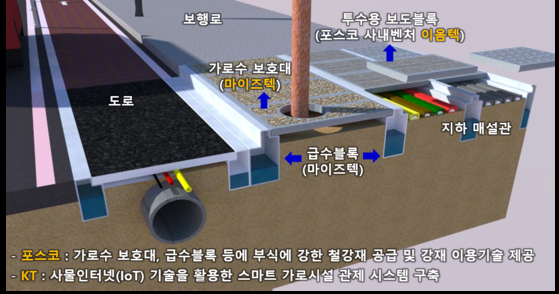 A blueprint for the smart street facility that will integrate the technology of Posco, KT and Mystech as part of the Smart Green City Initiative under the Ministry of Environment from 2021 to 2023. [POSCO]


Posco said Wednesday it signed a strategic partnership deal with KT and Mystech, a street infrastructure manufacturer, to collaborate on the Smart Green City Initiative.

The Smart Green City Initiative by the Ministry of Environment is part of the government’s Green New Deal. The initiative was announced in July for implementing environmentally-friendly projects at designated cities in Korea from 2021 to 2023.

The main project of the partnership deal is the establishment of a smart street facility, an environmentally-conscious project that waters trees at the right time. The project integrates Posco’s steel technology, KT’s internet of things (IoT) and Mystech’s production capability.

The partnership states that the three companies will recommend building the smart street facility to local governments and building a task force for joint marketing efforts.

The smart street facility includes blocks that store rainwater and supply water when it is needed and a protection pad that prevents trees from being uprooted. According to Posco, this facility can lengthen the life of plants and reduce carbon dioxide in the atmosphere. Posco added that the project will improve the aesthetics of the cities as electric lines and pipes will be buried underground.

Posco is planning to merge the capabilities of companies ranging from venture to major firms to develop the smart street facility. The steel company said it will supply special steel frames that do not easily decay and also offer steel technology.