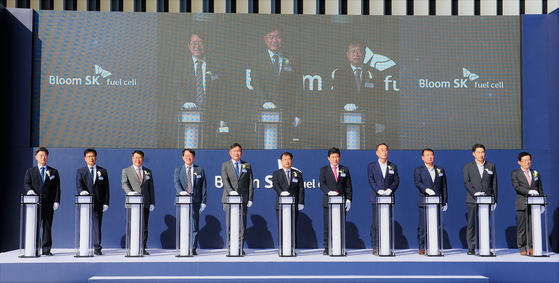 SOFCs are electrochemical devices that convert chemical energy of fuel and an oxidant directly into electrical energy. Their generating efficiency is higher than existing fuel cells.

The two companies started the trial production of SOFCs in July. According to the company, the annual power capacity of the plant will be about 50 megawatts in 2021 and is expected to grow to 400 megawatts by the end of 2027.

The first locally-produced SOFCs will be supplied as soon as the beginning of next year to a fuel cell power plant that will begin to be built in January 2021.

During the opening ceremony on Tuesday, SK E&C announced two other developments.

SK E&C has won an SOFC engineering, procurement and construction (EPC) project from Equinix, a U.S.-based data center operator. The company will be in charge of building a 6.4-megawatt SOFC in Equinix’s data center in San Jose, California. The construction begins in April 2021 and will run for eight months.

In addition, SK E&C, SK Advanced and Bloom Energy signed a memorandum of understanding (MOU) for a pilot project that uses byproduct hydrogen as fuel. The project is designed to verify the commercialization of producing SOFCs using the hydrogen generated from the propylene production process. If it succeeds, the company is expected to cut back on operating costs.

“We aim to lead the global eco-friendly dispersed generation market by boosting our competitive edge on exports based on the company’s outstanding construction ability and local component manufacturers’ high-quality and price competitiveness,” SK E&C CEO Ahn Jae-hyun said during the opening ceremony. “With our capability to locally produce SOFCs, SK E&C will also contribute to the government’s Green New Deal and new energy project.”