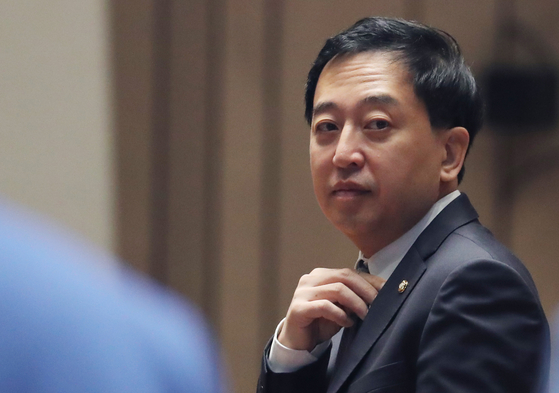 “I sent a fax to surrender my party membership in the morning,” Keum told the JoongAng Ilbo on Wednesday. Earlier in the day, he posted a message on Facebook to announce his decision to part with the DP over his disappointment with its leadership.

“Five months passed since I appealed the party’s decision to punish me for abstaining from a party-line vote to approve a contentious bill establishing a new investigative agency for senior public servants,” Keum wrote. “The party has done nothing about my appeal and is avoiding its responsibility. Under this circumstance, it is better for me to leave.”

On Dec. 30, 2019, the DP and its allies passed a bill to establish a new investigation agency, intended to weaken the prosecution’s powers. Keum, a former prosecutor, opposed the idea. He was the only DP lawmaker to abstain from voting on the bill.

The DP’s Ethics Tribunal decided on May 25 to punish Keum and issued a warning to him. Keum filed an appeal in June, calling the punishment “unprecedented and unconstitutional.”

In his Facebook message on Wednesday, Keum said the DP’s inaction on his appeal was not the only reason for his departure.

“The DP has lost its flexibility, humility and culture of communication,” he wrote. “Most of all, the biggest problem is the DP’s high-handed attitude of dividing the people and labeling its critics criminals and pro-Japan collaborators.”

He wrote that he was deeply disappointed at party leaders, including President Moon Jae-in and DP Chairman Lee Nak-yon. Keum said they only try to please their political base, despite their supporters’ unreasonable intolerance of any criticism of the party and the administration.

“Despite political disadvantage and unbearable criticism, I spoke frankly about my opinions, but I can no longer approve the direction this party is going,” he wrote. “As an expression of my final protest, but with sincerity, I decided to leave the party.”

The 54-year-old former prosecutor started his political career in 2013 to support presidential candidate Ahn Cheol-soo. He joined the predecessor of the DP, the New Politics Alliance for Democracy (NPAD), in March 2014, and won his first legislative election in 2016. During six years and seven months with the party, he served as a spokesman and head of the strategy planning committee.

Keum has been known for his critical stance toward former Justice Minister Cho Kuk, especially as Cho and his family faced investigations and trials for alleged financial and academic corruption.

In last April's general election, Keum ran for re-election in Seoul's Gangseo District, but failed to win a DP nomination.

In an interview with News 1, Keum said it is premature to say whether he will run in next year’s Seoul mayoral by-election but did not rule out the possibility.

The by-election will be held on April 7, 2021, to fill the vacancy created by the abrupt suicide of Mayor Park Won-soon. Park, a DP member, committed suicide after a secretary accused him of sexual harassment.

Keum also denied speculation that he will join the opposition People Power Party (PPP). “The PPP needs even more improvement than the DP,” he said.

But he admitted that he had a meeting with the PPP’s acting leader Kim Chong-in after the April general elections. “But I did not meet with him alone,” Keum said. “Since Kim once headed the DP, I met with him with other DP lawmakers.”

Kim, a renowned political strategist, joined the DP as a leader but left the party in 2017. In March 2020, the PPP recruited him to oversee the April general election campaign and he has been leading the party as acting head since June.

Kim said Wednesday that he is willing to meet with Keum. Asked if he will recruit Keum, Kim said, “I have never talk about the possibility with him.”

DP Chairman Lee said Wednesday that it is unfortunate that Keum left the party because of the delayed appeal process and said the party will take his advice seriously.

Other DP members said rumors spread recently that Keum would leave the party and run as an independent in the Seoul mayoral by-election.

“I guess he made a strategic choice,” said a second-term lawmaker of the DP. “From the party’s perspective, he wasn’t even a meaningful asset.”