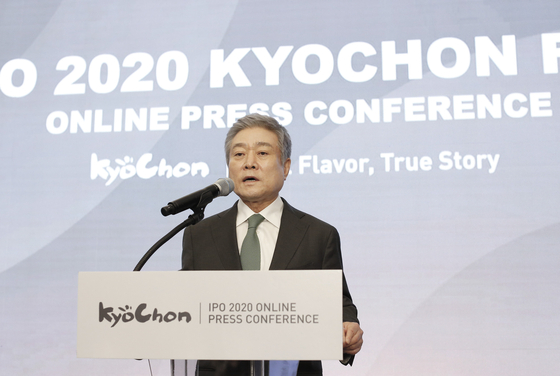 CEO of Kyochon F&B, So Jin-se speaks to the press at an online conference ahead of the company's IPO, Thursday. [KYOCHON F&B]


Kyochon F&B hopes to use chimaek — the beloved Korean combination of fried chicken and beer — as a springboard to global success, opening more stores overseas and adding products to its domestic portfolio, including its own beer.

“We will actively expand businesses overseas,” said CEO So Jin-se at an online press conference for the media Thursday morning ahead of an IPO in November.

“The initial public offering [IPO] of our company is meaningful because we will be the first food franchise to trade on the Kospi," he continued. "Kyochon will put in the effort to grow into a global food manufacturing company.”

Kyochon F&B is the largest fried chicken franchise by market share in Korea. It owns around 15 to 20 percent of the 4.2-trillion-won ($3.7 billion) chicken market.

Korea has had some big IPOs this year, starting with SK Biopharmaceuticals in May, Kakao Games in July and Big Hit Entertainment, the company behind megastar BTS, in October. The Kakao Games IPO set a new record in deposits for shares: More than 58 trillion won.

Kyochon’s branches report average revenues of 34.9 million won per 3.3 square meters (35.5 square feet), the highest among chicken franchises in Korea. Its stores have the lowest closure rate of 0.2 percent, according to data from KB Financial Group’s research center.

The company’s net profit was 12.1 billion won for the first half of this year and 215.6 billion won in sales, but it hasn't released corresponding figures for the year-earlier period.

The company changed its management in 2018 by replacing Kyochon’s founder with a professional CEO from the Lotte Group. Following the leadership change, the company’s net profit surged 154.3 percent from 2018 to 2019. 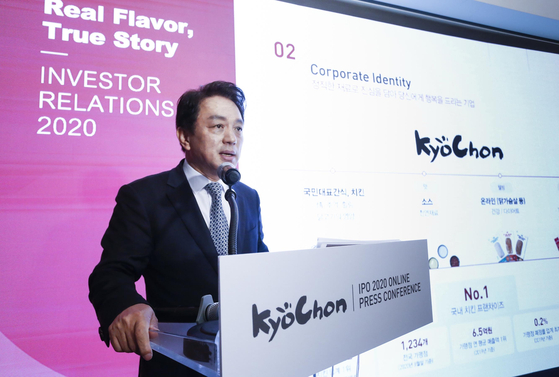 CEO and President of Kyochon F&B Hwang Hak-soo speaks to the press at an online conference ahead of the company's IPO, Thursday. [KYOCHON F&B]


“2019 was the watershed moment for our company,” said CEO and President Hwang Hak-soo. “We closed unprofitable businesses and started entering foreign markets.”

Its strategy in the domestic market was simple: Increase the number and size of stores. Kyochon will increase store numbers from 1,234 to 1,500 by the year 2025.

It’s also planning stores for customers in non-residential areas, like golf courses and beaches, which require quick and simpler stores.

Currently, Kyochon operates 37 stores in six countries. Its goal is to open 500 stores in 25 countries over the next five years. It has its eyes on the Middle Eastern market and received a halal certification for its fried chicken sauces.

Another strategy is to develop new products beyond fried chicken.

Last year, Kyochon entered the home meal replacement market, with ready-made meals for convenience stores and supermarkets using unpopular parts of the chicken such as wings and drum sticks.

The company said it will concentrate on its sauce subsidiary, BHN Bio, and sell sauces to a larger range of customers. Beer brewed by Kyochon will also be on the menu at its chicken franchises.

“Fried chicken and beer is a widely loved pair. If the company launches its own beer brand, it can create synergy and a possible opportunity to rebrand the company,” said analyst Choi Jong-kyoung, at Heungkuk Securities.

For the IPO, institutional book building will run from Oct. 28 to 29. Subscriptions for retail investors are scheduled for two days from Nov. 3 to 4.

If Kyochon's IPO share price is set at the highest level, it will bring the company's market capitalization to 307.3 billion won.