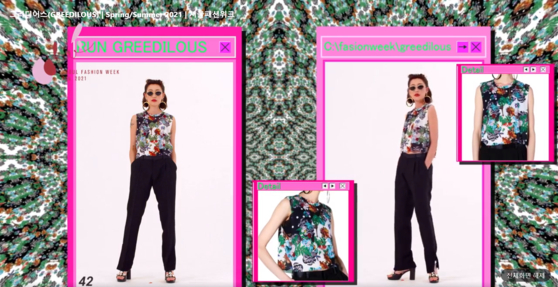 
Get ahead of the fashion game by taking a peek at next season’s collections now and getting your hands on the must-have items at a discounted price during the 2021 S/S Seoul Fashion Week.

The most sought-after front row is now available to everyone for the first time as shows move to the online domain.

Hosted by the Seoul Metropolitan Government and organized by the Seoul Design Foundation, the 2021 S/S Seoul Fashion Week opened its digital runways on Tuesday.

Filmed in various locations in Seoul that range from a sky bridge or a rolling field of reeds, designers' 2021 S/S collections are being showcased in a new setting away from Dongdaemun Design Plaza, or DDP, which had been the venue for the Seoul Fashion Week since 2014. 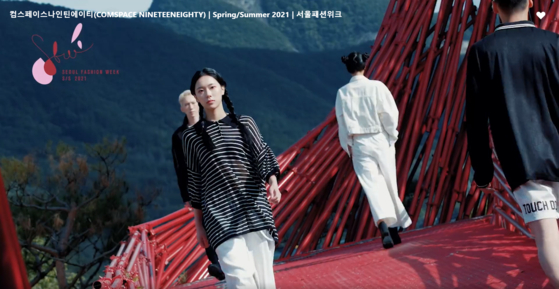 In Generation Next, nine rookie designers will stage their collections in front of the major urban landmark and previous home to Seoul Fashion Week, the DDP. British designer Edward Crutchley, who won the 2019 International Woolmark Prize, will participate as part of the international exchange fashion show.

“The transition to the digital runway and the introduction of live commerce will not be a temporary measure, but a leading example as an alternative to expand and develop Seoul's fashion business in the post-Covid-19 era,” Choi Kyung-ran, CEO of the Seoul Design Foundation, said.


What’s new in the 2021 S/S Seoul Fashion Week is the livestream shopping arena dubbed "See Now Buy Now,” which allows anyone, not just VIP customers, to purchase selected products from the digital shows introduced on the same day within a limited time span.

Anyone can easily make an order of the item that the model is wearing during the live show. [SCREEN CAPTURE]


The live shopping show opens every night from 9 p.m. to 10 p.m. from Oct. 21 to 25 on Korea’s largest web search engine Naver under the Naver Shopping Live tab, as well as on the Chinese app WeChat’s shopping platform.

"WeChat has 1.2 billion daily active users in China, which is expected to be a great opportunity for our designers to sell K-Fashion items directly to Chinese consumers and explore the huge market,” the organizer of the show, Seoul Design Foundation, said.

With Korean representative models Han Hyun-min and Irene Kim as the hosts, the first show on Wednesday recorded 10,122 views.

"It was a great opportunity to promote ourselves to those who didn't know our brand,” an official from ul:kin said a day after their clothes featured on a live show on Wednesday.

Another brand that participated in the show said it was very nice to have famous models introduce the products in detail as show hosts. “The existing fashion show only shows models walking the runway, but this live show provided an active channel to communicate with the consumers live by giving size and styling recommendations.”

A downside was that since six different designer brands had to be showcased within the hour, only two pieces from each could be introduced.

"We couldn’t present our brand’s characteristics to the fullest as we only had a limited time," another brand official from C-Zann E said. "Because each brand's characteristics were encapsulated by two pieces, it didn't seem like the brand was expressed properly. I wish we had at least five pieces introduced during the live show.”