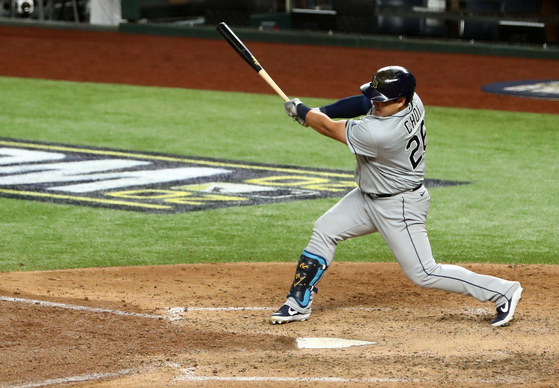 Choi Ji-man of the Tampa Bay Rays makes a hit during Game 2 of the World Series against the Los Angeles Dodgers at Globe Life Field in Arlington, Texas on Wednesday. [REUTERS/YONHAP]


Choi Ji-man of the Tampa Bay Rays became the first Korean ever to pick up a World Series hit in Game 2 of the Fall Classic at Globe Life Field in Arlington, Texas on Wednesday.

Assigned as the clean-up hitter and first baseman in Game 2 of the World Series against the Los Angeles Dodgers, Choi added two runs and a hit in three at-bats to help his team pick up a 6-4 victory.

With the win, the Rays tied the series at 1-1 against the Dodgers.

The Dodgers finally fought back with Chris Taylor’s two-run homer at the bottom of the fifth, but as the Rays added another run from Wendle’s sacrifice fly at the top of the sixth, they once again managed to give their pitchers some breathing room.

The Dodgers did manage to add two more runs as Will Smith and Corey Seager each hit solo home runs at the bottom of the sixth and the eighth, respectively, but they weren’t able to catch up.

Looking specifically into Choi’s performance, he was struck out in the first inning and hit a grounder at the top of the fourth but managed to reach first base as the Dodgers chose to pick off the runner heading on to second base. With Manuel Margot’s hit, Choi reached second base and headed back home on Wendle’s two-run double that inning.

At the top of the sixth inning, Choi finally added a hit to the right field. By doing so, he became the first-ever Korean batter to make a hit in a World Series game.

“Ji-man Choi becomes the first Korean-born player to record a hit in the World Series,” the MLB posted on its official Twitter account.

Choi came around to score again off a sacrifice fly, again hit by Wendle.

Although Choi is the fourth Korean to play in the World Series — following Ryu Hyun-jin, now of the Toronto Blue Jays, Park Chan-ho and Kim Byung-hyun — he is the very first Korean batter to achieve the feat.

After a day of rest, Game 3 of the World Series will continue on Friday night, or 9:08 a.m. on Saturday morning in Korea.