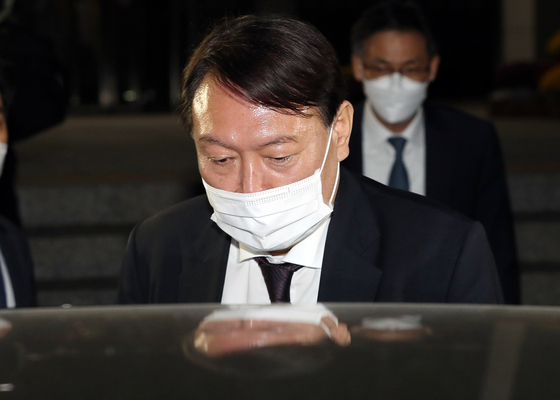 
Prosecutor General Yoon Seok-youl on Friday left open the possibility of entering politics after his tenure ends next year.

During the National Assembly’s audit of the Supreme Prosecutors’ Office Thursday, Yoon was asked by an opposition lawmaker if he was considering becoming a politician. The audit, which started at 10 a.m. Thursday, went on for 15 hours, ending around 1 a.m. on Friday.

Rep. Kim Do-eup of the opposition People Power Party (PPP) asked the final question of the session. “The media sees you as a presidential candidate and includes you in their polls,” Kim said. “After your tenure as the prosecutor general, are you willing to enter politics?”

“I am too occupied with my current job now, and it is inappropriate for me to talk about my future plan,” Yoon said. “But, since I was privileged to receive many benefits from society throughout my life, I will think about a way to serve the society and the people,” Yoon replied.

“Is being a politician one of the ways?” Kim asked.

“It is hard to answer right now,” Yoon said.

“He didn’t deny the possibility of becoming a politician, so it seems he is open to the possibility,” said Rep. Kim Jong-min of the ruling Democratic Party (DP). “He seems to be in harmony with the PPP lawmakers.”

A PPP lawmaker agreed that Yoon had left open the possibility of a future as a politician.

Yoon has been frequently mentioned as a possible presidential candidate in opinion polls. Appointed by President Moon Jae-in as prosecutor general in July 2019, Yoon’s two-year tenure ends next year. The next presidential election takes place in 2022.

Gallup Korea conducted a poll from Oct. 13 to 15, asking voters who they want as the next president, and Yoon scored 3 percent, ranking fourth on the list. (Details of the poll, which has a 95-percent confidence rate and margin of error of plus or minus 3.1 percentage points, are available at the Gallup Korea homepage.)

Gyeonggi Gov. Lee Jae-myung was at the top with 20 percent, DP Chairman Lee Nak-yon was second with 17 percent and Ahn Cheol-soo, former presidential contender and the chairman of the People’s Party, was ranked third with 4 percent.

Yoon earned the nickname “swordsman” for indicting high-profile politicians and heads of big business groups throughout his career.

In 2013, he revealed during a parliamentary audit that his probe into illegal meddling by the National Intelligence Service in the 2012 presidential election was interfered with by his superiors.

The remark was taken as a rebellion within the prosecution, which values loyalty to the chain of command. For the next few years, Yoon was assigned to minor posts outside Seoul in a series of demotions.

He returned to the spotlight in December 2016, when he was asked to join an independent counsel team that investigated then-President Park Geun-hye. Shortly after Moon took office in May 2017, the new liberal president handpicked Yoon to head the Seoul Central District Prosecutors’ Office, stressing that he wanted Yoon’s office to fully engage in court battles over the indictments of Park and her associates.

Two years later, Moon promoted Yoon as the top prosecutor, advising him to “not be afraid of going after the powers that be including those in the current administration.”

But relations between Yoon and the Moon administration turned sour after Yoon ordered prosecutors to launch investigations into Cho Kuk and his family for their suspected financial and academic irregularities after Moon nominated Cho as the new justice minister in August 2019. Cho served as justice minister for 35 days and stepped down in October that year to face investigations and indictments.

Yoon is currently in a heated battle with Justice Minister Choo Mi-ae, who carried out reshuffles to demote senior prosecutors close to Yoon. Lately, she issued a series of orders to exclude Yoon from some controversial probes, questioning his political neutrality. Yoon has denied that the investigations were compromised.