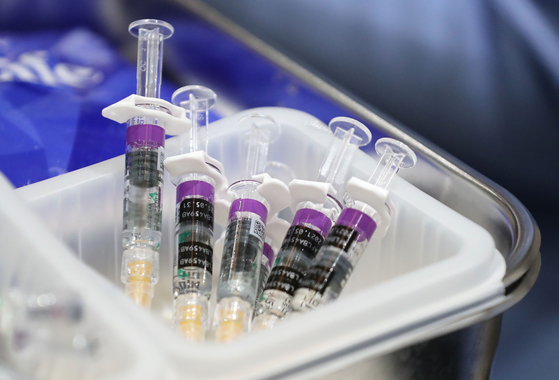 Influenza vaccines prepared at a clinic in western Seoul on Oct. 20. [NEWS1]

Four people died after getting influenza vaccinations manufactured by SK Bioscience, according to information released by the Korea Disease Control and Prevention Agency (KDCA) on Thursday evening.

A 73-year-old woman in North Gyeongsang who died on Oct. 21, the same day she was vaccinated, was given a vaccine from the same batch as another person who died at a later date, KDCA announced in a press release Thursday. Details about the second fatality were not released by the KDCA.

Another two fatalities were found to have been vaccinated from a single batch — different from the batch mentioned earlier — according to the KDCA. One of the duo was a 79-year-old man who died on Oct. 21, two days after he was vaccinated.

The two batches were both produced by SK Bioscience.

In a hearing at the National Assembly earlier Thursday, KDCA Commissioner Jeong Eun-kyeong said that if there were numerous deaths following vaccinations from a single batch, she would ask for “suspension of vaccination from that batch” and request the Ministry of Food and Drug Safety to retest vaccines from the batch.

An update on that decision was to be relayed by the KDCA to the press later Friday.

As of Thursday midnight, the number of people who died after flu vaccinations totaled 32. The government rolled out its influenza vaccination programs from early September and the first case of death after vaccination was on Oct. 16.

Around 560,000 people have received vaccines from the batches linked to at least 12 deaths as of Thursday, according to the KDCA. Among them, fewer than 20 have reported unusual, and not very severe reactions.

The vaccine program had several glitches before the deaths.

Last month, health authorities found out that some vaccines distributed by one of the 10 vaccine manufacturers, Shinsung Pharm, were left at room temperature as they were being shipped to medical facilities.

After that incident, the government temporarily halted its free vaccine program for children and the elderly and recalled the batches distributed by Shinsung Pharm.

But at least one death — the first — has been linked to Shinsung Pharm’s vaccine. A 17-year-old high schooler died on Oct. 16, just two days after receiving a shot manufactured by Shinsung.

Korea Vaccine produced shots linked to the deaths of at least two of the victims, both from Daejeon, as of Thursday.

At least four other drug companies were responsible for vaccines tied to the other deaths: SK Bioscience, Boryung Pharm, LG Chem and GC Pharma. Ten companies are taking part in the government’s influenza vaccination program.

The KDCA has maintained that there is no clear indication that the vaccinations have caused the deaths and has not suspended the vaccination program.

Such assurances have failed to allay mounting fears among a public already anxious over a resurgence of Covid-19 cases. Local clinics across the country have been bombarded by phone calls from concerned citizens inquiring about the safety of vaccines and symptoms of complications that could arise from shots.

Some local governments are suspending vaccinations on their own. Pohang city government decided Friday to suspend the program in the city from Friday to Oct. 29.