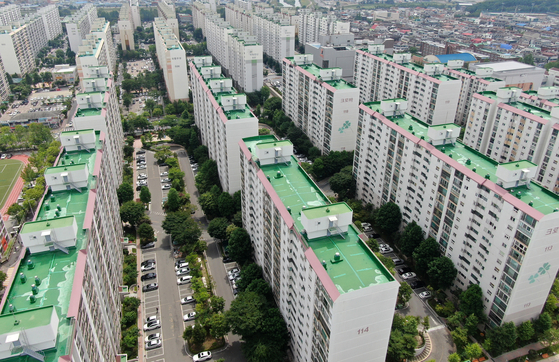 An apartment complex in Seo District, Daejeon. The average apartment price in Daejeon rose 2.29 percent during the last two months, the highest increment among the five metropolitan cities outside of the Seoul metropolitan area. [YONHAP]

An 84-square-meter Hyundai I’Park in Seo District in Daejeon sold for 790 million won in September, 90 million won, or 11.4 percent, more than a transaction for the same size apartment in August.

Real estate analysts say that the apartment market has been responding to the government’s June 17 regulations to cool down the market — although no cooling down is visible. People are turning to property outside of Seoul to invest in.


As part of those June 17 measures, the government made it more costly or difficult to invest in the Seoul Metropolitan region.

According to the Korea Appraisal Board, the rate of increase in prices of apartment prices in five major cities outside of greater Seoul was 0.58 percent in June. That is a big jump compared to minus 0.03 percent in April and 0.11 percent in May. The rate continued on a growth trend throughout the July to September period. 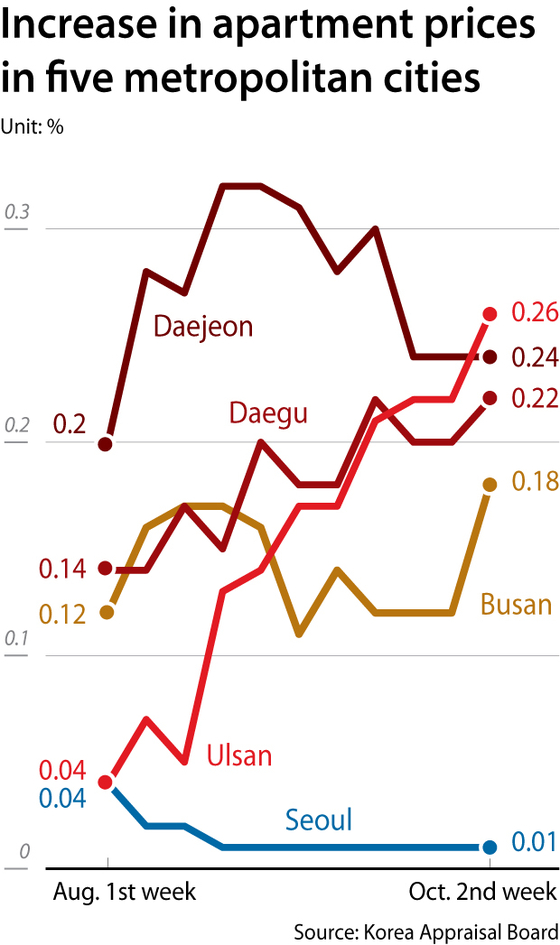 Real estate analysts say the higher prices for jeonse, or lump-sum rental deposits, compared to the actual selling prices in suburban regions is due to an increased demand in real estate investment. The high jeonse-to-price ratio indicates that suburban regions are prime for gap investments, which refers to a unique form of real estate purchase in Korea based on the jeonse system. It allows an investor to own a property with little money by using the gap between the actual purchase price of a home and the jeonse deposit.

In Seoul, the average jeonse price was 57.5 percent of the actual value of an apartment, but for five other metropolitan cities, the ratio was 72.1 percent. Based on the data, it requires 212.5 million won to buy an apartment worth 500 million won through a gap investment. Meanwhile, in Gangwon, it only requires 77.5 million won. The average ratio in Chuncheon, the capital city of Gangwon, is 84.5 percent.

“Abundant liquidity has been circulating in the real estate market, since it has nowhere else to go,” said Ham Young-jin, head of big data at real estate app Zigbang. “The psychology of desire to purchase property before prices increase also applies in this situation centered around unregulated regions, which have suffered smaller increases in real estate prices.”

A so-called paradox of regulations has also been contributing to the price increases. Investors are aware that when regions are targeted for real estate regulations, prices end up going up. For example, when the government limits a time period during which an owner can sell a property, in order to rein in gap investment, the quantity of available properties in the market goes down.

Real estate analysts also say that the balloon effect, which resulted from price increases in regulated areas, contributes to the increase in prices for property in suburban regions.