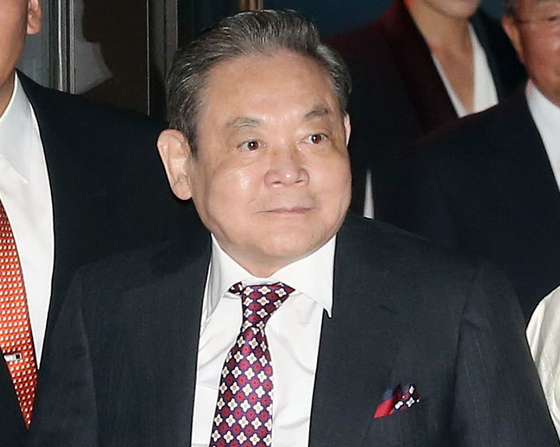 
Lee Kun-hee, the chairman of Samsung Electronics for 33 years, died on Sunday in southern Seoul. He was 78 years old.

Lee died from complications related to chronic illness at the Samsung Medical Center in Gangnam, southern Seoul, where he had been hospitalized since May 2014 after he suffered a heart attack at his home in Itaewon, central Seoul.

Born in Daegu in 1942, Lee was the third son of Samsung founder Lee Byung-chul. He attended middle school in Japan and high school in Seoul. Lee graduated from Waseda University in Tokyo and studied for, but did not complete, an M.B.A. at George Washington University in Washington, D.C.

Lee became the second chairman of Samsung at the age of 46 in 1987, following his father’s death. He is credited with fundamentally reforming Samsung and is often quoted as explaining his approach to business as “change everything, except for your wife and children.”

Under Lee's leadership, Samsung grew to become one of the biggest brands in the world in both the consumer electronics and semiconductor industries.

Lee served as a member of the International Olympic Committee until 2017 and played a large role in Korea's hosting of the 2018 PyeongChang Winter Olympics. He also founded the Leeum, Samsung Museum of Art in Yongsan District, central Seoul.

Lee fell into a coma for two weeks following the incident in 2014 and remained at the hospital receiving therapy.

He is survived by his wife Hong Ra-hee, former director of the Leeum, his son Lee Jae-yong, who has effectively led Samsung Electrics as vice chairman since his father fell ill, and daughters Lee Boo-jin, CEO of Hotel Shilla, and Lee Seo-hyun, who runs the Samsung Foundation.