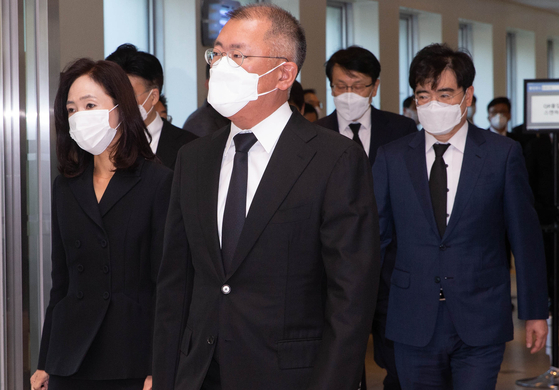 
The mourning altar for Samsung Electronics Chairman Lee Kun-hee drew hundreds of prominent business and political leaders Monday as tributes and a debate over his legacy dominated the media.

The chief of Hyundai Motor was among the first to arrive at the Samsung Medical Center, southern Seoul.

“I appreciate Lee’s ceaseless efforts to instill the desire to be the best in the economic and business fields,” Chairman Chung told reporters on his way out, expressing a feeling of loss over the death of “such a great man.”

Asked about what changes he expects in corporate governance if the late chairman’s shares in group companies go to his eldest son Lee Jae-yong and two daughters Lee Boo-jin and Lee Seo-hyun, Chung vaguely answered “many good changes in different aspects.”

Park Yong-maan, chairman of the Korea Chamber of Commerce and Industry, echoed that idea.

“While I looked at the picture [of Lee at the mourning altar], I thought that it could be his last wish that Lee Jae-yong’s leadership will flourish,” Park said.

“[Lee Kun-hee] is credited with advancing the Korean economy through different products including semiconductors and creating many jobs,” Chung said.

“Chairman Lee, who transformed Samsung into a top-tier company on the global stage, played a critical role in establishing a stepping stone for growth in Korean economy,” the statement noted. “Samsung proclaimed that it would be the top-rated company, but the way it achieved those objectives sometimes went against the law.”

The party mentioned illicit transactions between affiliates, a long-held policy of banning labor unions and cozy relations with the government as “negative legacies” of Lee.

The DP called on the junior Lee to make a clear departure from such illegal practices.

Gyeonggi Gov. Lee Jae-myung, who is affiliated with the DP, visited the mourning altar on Sunday.

The contrasting view of Lee and his legacy was evident among the Korean public, with the younger generations more disapproving of illegal activities committed by the founding family and executives of Samsung affiliates.

“As a citizen of the country," said Kim Jun-su, a university student who lives in Seocho District, southern Seoul, "I hope Samsung could set a good example by tackling ongoing controversial issues regarding inheritance taxes in a transparent manner."

“Changes in Samsung Group always becomes a big financial issue for this country,” Jo Song-gil, a man in his 30s who works in the financial sector, said. “I heard the inheritance tax for Lee’s stocks is likely to exceed 10 trillion won [$8.8 billion]. […] I guess ongoing issues such as the company’s corporate governance and inheritance might cause problems to the group itself."

Older people commented on the sadness of losing a business titan.

“I feel so bad for Lee,” said Chong Keuk-mo, an author in his 50s who lives in Jung District, central Seoul.

“There could be some people who have different perspectives on Samsung Group. But as a person who saw the whole journey that Lee went on, from the beginning when he was appointed as the chairman to until now, I really feel sad about his death and I think almost all who are in my age bracket might have felt the same way.”

Samsung employees expressed their condolences online, and more than 20,000 messages were posted on an internal corporate site.

“The late Chairman Lee Kun-hee led the development of the semiconductor business to make it the economic backbone of the Korean economy,” the letter read.