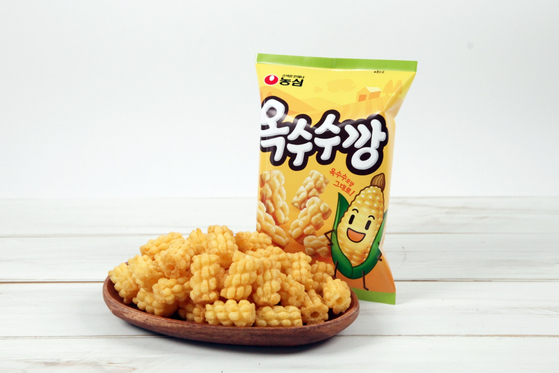 Nongshim has introduced a new Oksusukkang, or corn chips, in its popular kkang-suffix snack lineup, the company announced Monday.

It’s the first new kkang-named chips to be introduced in 47 years since Gogumakkang in 1973.

Nongshim’s history of kkang-named snacks started with Saewookkang, or shrimp-flavored chips, which was first introduced in 1971, according to Nongshim.

Others are Yangpakkang, Gamjakkang and Gogumakkang, which are onion, potato and sweet potato snacks, respectively.

They have been steady sellers for years, but their popularity grew dramatically recently since singer Rain’s song “Gang,” which is pronounced “kkang,” started attracting attention. The song, which was released in 2017, was originally considered a misstep in the singer’s career due to its narcissistic lyrics and outdated choreography and visuals. But it quickly became a viral hit after some wisenheimers started remaking scenes from the music video to ridicule the singer.

According to the company, it added corn-flavored chips on the lineup with the aim of targeting people of all ages and sexes.

“[Oksusukkang is] a snack that many people would love with corn’s savory and sweet taste and smell,” a spokesperson for Nongshim said. “We hope families can enjoy the new Oksusukkang altogether.”

Sales of four key kkang-named snacks totaled 10 billion won ($8.9 million) in July, all-time high monthly figure in the company’s history. Nongshim’s best-selling Saewookkang has been playing a big role in the snack industry, with about 70 billion won of annual sales.