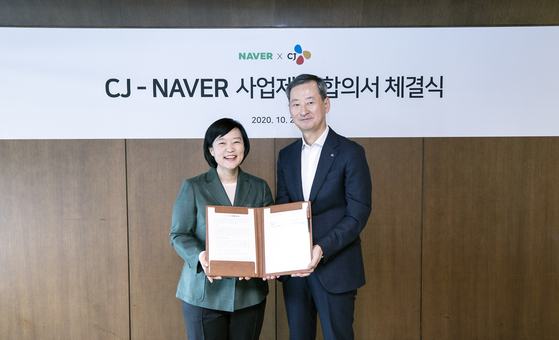 
CJ Group and Naver have agreed to trade stocks worth 600 billion won ($530.5 million) with the goal of generating synergy effects in the e-commerce, fulfilment and entertainment businesses.

The shares are set to be traded on Tuesday.

One of the key areas that the companies plan to work together on is sharing intellectual property on entertainment content, including webtoons, by turning original content into movies, drama series and animations.

The two parties plan to invest 300 billion won over the next three years on a joint fund to be used to create contents.

Distributing CJ ENM’s music and artists’ performances on Naver’s video platforms, including V Live, and producing content that can be enjoyed in virtual reality and artificial reality are other areas that the two companies plan to cooperate on.

“The expansion of Korean content abroad is expected from the cooperation between CJ, which has the ability to produce content that can compete globally, and Naver, which owns webtoon and web novels,” said a spokesperson for CJ in a statement. “Based on that, [CJ and Naver] will contribute to activating the ecosystem for creation and add new jobs for young people.”

Naver and CJ Logistics will team up on e-commerce.

Naver has risen as a major player in the retail business through its large number of portal users, but its delivery — comparatively slower than the next-day delivery offered by other e-commerce operators like Coupang — could limit its competitiveness.

The two parties plan to jointly invest on developing the logistics infrastructure. Vendors on Naver will be able to utilize CJ Logistics’ fulfilment service, which will handle stock and deliver products directly to customers from fulfilment centers.

Automating logistics is also part of the plan to raise efficiency.