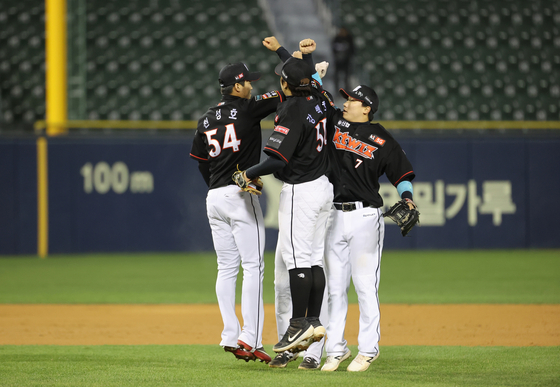 KT Wiz players celebrate after picking up a big 17-5 victory against the Doosan Bears at Jamsil Baseball Stadium in southern Seoul on Oct. 22. [YONHAP]


While the NC Dinos have already claimed the pennant for the first time, the fight for the runner-up spot is more competitive than ever as the 2020 KBO regular season enters its final week.

By playing to a 3-3 tie against the NC Dinos at Changwon NC Park in Changwon, South Gyeongsang on Saturday, the Dinos picked up the club’s first-ever regular season title. With the title comes a one-way ticket all the way to the Korean Series, currently scheduled to start on Nov. 17.

While the Dinos now have some room to breathe, the competition among the next four teams in the standing is as competitive as ever. Although the No. 2 LG Twins, No. 3 KT Wiz, No. 4 Kiwoom Heroes and No. 5 Doosan Bears are all now guaranteed a spot in the playoffs, how easy their postseason journey is has not yet been decided.

As of Monday, the Twins are ranked second, four games behind the Dinos, but as they only have two games remaining until they complete all 144 games of the regular season, manager Ryu Joong-il still has his work cut out to hold on to that No. 2 spot.


Since the third-ranked Wiz still have four games remaining and are only .5 of a game behind the Twins, the result of those last two games for the Twins could be crucial.

The Twins, one of the oldest teams in the KBO, haven't won a Korean Series title since 1994. Holding on to second place would give the Twins a bye straight to the final playoff round, making their journey to the Korean Series a lot easier.

Also, as veteran Park Yong-taik is expected to retire after this season, the players and the Twins are hoping to make 2020 their year.

The Twins’ remaining two make-up games are against the bottom-ranked Hanwha Eagles and the ninth-ranked SK Wyverns.

But it isn't going to be easy. The Wiz, the latest team to join the KBO, are on track for a serious upset this season.

Despite getting off to a horrible start and being down in ninth place in June, the Wiz have slowly made their way up to secure their first-ever spot in the postseason — and they still have a very good shot at second.

By the first week of October, the Wiz had moved all the way up to the second spot in the league. They have now slipped back down to third, but with four more games remaining, the Wiz could easily take that top spot back. Statistically, that could happen as the Wiz are scheduled to play two games against the sixth-ranked Kia Tigers and two against the Eagles.

The Wiz will play their remaining four games starting Tuesday after a five-day break. On Thursday last week, the Wiz picked up a big 17-5 victory against the Bears, their third win in a row and their last game of the week.

A core part of the Wiz’s success this season has been foreign player Mel Rojas Jr. As of Monday, Rojas Jr. tops most of the KBO’s individual rankings for batting — batting average, at .353, home runs at 46, RBIs at 132, runs at 113 and slugging percentage at .689.

Although the season hasn’t ended for the Wiz, the team has already re-signed manager Lee Kang-chul to another three-year contract, this time at 2 billion won ($1.8 million).

The Heroes are also hoping to finish strong, but with just one game remaining, .5 of a game separating them from the Wiz and one game from the Twins, the chance of the Heroes finishing any higher than fourth place is incredibly slim.


The bigger threat to the Heroes comes from the fifth-ranked Bears, currently 1.5 games behind the Heroes. The Seoul clubs will face each other again on Friday, the Heroes' last game of the regular season, and then almost definitely do so again in the Wildcard series.

The fifth-ranked Bears are in an unfamiliar spot, but they are hoping to make an upset by heading all the way up to the Korean Series. The Bears also have three games remaining and are 2.5 games behind the Twins, so anything could happen in the last minute. As of now, it seems likely that the Bears will head to the Wildcard series.

The remaining five teams in the league — the Tigers, Lotte Giants, Samsung Lions, Wyverns and Eagles — have no shot at the postseason.

The 2020 regular season was due to end on Friday, but due to a rain cancellation, the Tigers and the Dinos will play one more game on Oct. 31, but considering the current rankings, that game won't have any impact on the final standing.

The Wildcard series will start on Nov. 1.