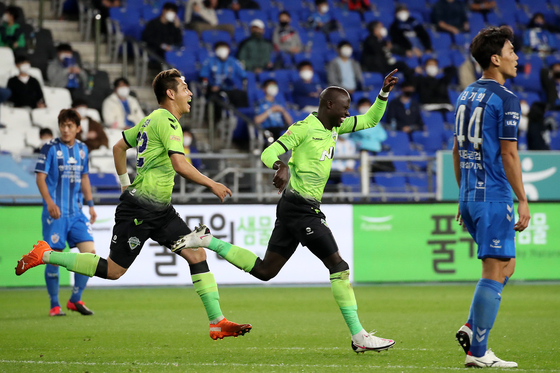 Jeonbuk Hyundai Motors players, in green, celebrate after Mo Barrow scored the opener during a match against Ulsan Hyundai FC at Munsu Football Stadium in Ulsan on Sunday. [NEWS1]


His club may be on the verge of a historic championship, but Jeonbuk Hyundai Motors head coach Jose Morais wants his players to remain cool, calm and collected for their final K League 1 match of the season.

Jeonbuk climbed to the top of the league table with a 1-0 victory over Ulsan Hyundai FC on Sunday. Mo Barrow scored the winner in the 63rd minute at Ulsan Munsu Football Stadium in Ulsan. Jeonbuk now lead Ulsan 57-54 in points, with each team having one match left to play next Sunday.

Jeonbuk will be hosting Daegu FC in Jeonju, North Jeolla. Jeonbuk have beaten Daegu 2-0 in each of their first two meetings this year, and they only need a draw for an unprecedented fourth consecutive title.

Morais insisted they won't be settling for a draw in front of their home fans.

"Since we're finishing up the season at home, we will try to lift the championship trophy before our supporters," Morais said after Sunday's win. "We've put ourselves in a good position with a win today, but at times like this, we have to stay calm. We want our fans to enjoy the title."

Jeonbuk and Ulsan also battled for the title last year, with Jeonbuk emerging with the trophy on the final day of the season. Morais, who took over Jeonbuk before the 2019 season, said his players have an abundance of big match experience and winning mentality that help them in critical junctures like Sunday.

"I think our players are better able to maintain their concentration and battle hard thanks to their experience," Morais said. "I haven't heard any player say, 'I don't think we'll win the title this year.' They give their best every moment. When I see my guys compete, I think to myself, 'This is how players on a first-place club are supposed to play.' I learn a lot from them."

Morais, ever the optimist, said his prematch pep talk lasted "only 10 seconds."

"I told them, 'Do what you've always done, play with confidence and have fun,'" Morais said.

With Jeonbuk on the edge of the title, the club on Monday announced the retirement of veteran Lee Dong-gook.

Jeonbuk announced Monday that Lee will be retiring from the sport and will hold his retirement press conference on Thursday at Jeonju World Cup Stadium in Jeonju.

He is the oldest active player in the K League this season, at 41, and throughout his career, Lee has scored 228 goals, making him the career goals leader in Korean football. With the announcement of his retirement, Sunday’s match against Daegu FC is expected to be Lee’s final appearance as an active player.

"I see my retirement as a new beginning, not an ending," he said in a statement released by Jeonbuk. "I've been quite happy as a football player. I'll miss the time I've spent as a member of Jeonbuk Hyundai Motors."

K League football season to finally kick off on Friday