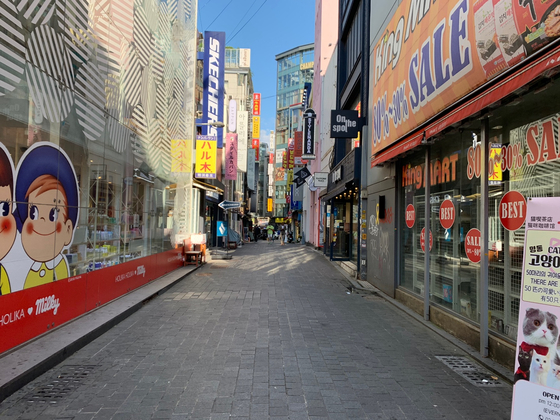 The once crowded streets of Myeong-dong, a famous tourist destination in Seoul, remains empty as the country was hit by the worst pandemic in a century. Small mom-and-pop stores are suffering the most. [CHEA SARAH]

Park Tae-hee has run an eight-table Japanese restaurant in Myeong-dong, central Seoul, for 13 years. In that time, he has been through a lot, including the 2008 global meltdown and the 2015 Middle East respiratory syndrome (MERS) outbreak.

He also survived a tough period after 2016, when Chinese tourists shunned Korea following the deployment of a U.S. missile system.

But he says he has never experienced anything like the coronavirus pandemic that has plagued the world for the last nine months.

“Even when the number of Chinese tourists dropped, it wasn’t as bad as what we’re currently going through,” Park said, stressing that sales have dropped more than 90 percent.
He took a shot at government financial aid to small businesses like his, saying it barely pays for the monthly electricity bill.

The restaurateur said he might have closed his shop earlier if it weren’t for his wife working in the kitchen and the others he employs.

A 50-year-old coffee shop proprietor says the lucky are able to close their shops.

“I wish I could go out of business,” said the businesswoman who runs A Twosome Place in Seongdong District, eastern Seoul, explaining that it costs too much money to close the doors.

“All of the equipment would end up simply as waste,” she said. “The kitchen facilities alone costs 150 to 200 million won. The coffee machine and ice cream maker are imports, which each cost 30 million won. Even if I want to sell them as secondhand, I couldn’t because there’s no one to buy them.”

“If the situation doesn’t normalize this year, I might have to seek out additional loans,” she said, adding that she barely held on in the first half. 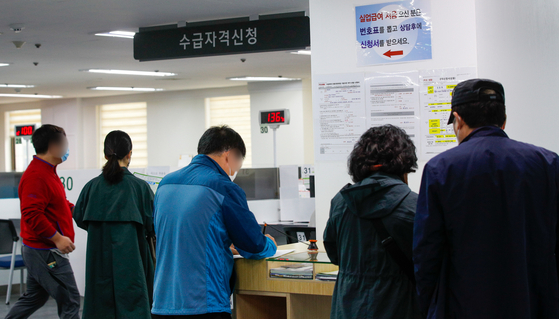 People applying for unemployment benefit at a government job and welfare center in Mapo District, Seoul, on Oct. 16. Due to Covid-19 the number of people employed as of September has shrunk 392,000, the biggest decline since the IMF crisis two decades ago. [NEWS1]

As of September, the number of people working when compared to a year ago shrunk 392,000.

This is not only the first time in more than a decade that the number of people employed has shrunk year-on-year, but also it is more than quadruple the 87,000 number of jobs that were lost in 2009 amid the global economic crisis.

It is also the worst job data in more than two decades. A total of 1.3 million jobs were lost during the 1998 crisis.

And the situation could get worse as the latest data do not include the upcoming layoffs by companies, especially airliners and travel agencies, that are more exposed to the pandemic.
Eastar Air on Oct. 13 announced the laying off of more than half of its remaining 1,200 employees.

Yang Joo-il, CEO of Naver’s NHN Doctortour, last week sent a letter to an employee saying that the company has no other choice but to lay off workers and give them what little severance it can muster. “I wish we could meet again at a different place for a different reason. I hope the sun will rise tomorrow.”


Many people in Korea are self-employed, with 25 percent of the country working in this way. That is the fifth highest ratio in the Organisation for Economic Cooperation and Development (OECD), where the average is 15.1 percent. More than half the self-employed in Korea are above 50.

Hardest hit are people that run their own small stores.

As of September, the number of self-employed in the country totaled 5.5 million.

Self-employment has been a major fallback in time of crisis, with the number of self-employed surging to over 6 million in the late 1990s after Korea went through its worst economic crisis. People that lost jobs opened up fried chicken stores, convenience stores and PC cafes.

The latest job statistics show the damage that Covid-19 has caused to small businesses especially since the resurgence in mid-August.

As of September, 225,000 workers in the restaurant and accommodation businesses, which includes small self-employed operations, were laid off. As a result, the number of people employed in the industry has shrunk nearly 10 percent compared to a year ago. Over 207,000 in wholesale and retail were laid off, shrinking the number of people employed by 5.7 percent, while employment in the education service industry fell by 151,000, or 7.9 percent.

The layoffs have hit the young hard.

A 25-year-old was laid off because the owner of a coffee shop where she worked could no longer afford to pay her.

“There was a time when we would only sell two coffees on an entire day,” she said, noting that she didn’t blame the owner for letting her go as she felt uncomfortable herself in working at a coffee shop that barely made any sales.

She is more worried about the future, as no shops are hiring.

“Recently it feels as though part-time job openings have significantly shrunk,” she said.

Last month, layoffs were particularly high among the young.

A large number of stores closing shops were closing in popular commercial districts.

In Myeong-dong, which once had little or no space to place a foot down due to the massive crowd of foreign tourists, shops are suspending business or shutting altogether.

Even the iconic pink budget cosmetic store Etude House at the entrance of the pedestrian street has had a sign that said its shops are temporarily shut.

Trucks loading up the tailings of shuttered stores have become a common sight.

The strict social distancing implemented between August and September especially increased the burden on small mom-and-pop stores, according to study by the Bank of Korea, reducing their sales by 30 percent in the greater Seoul area.

Yonsei University economics professor Sung Tae-yoon said the coronavirus pandemic is unlike past crises, which were mostly about finance. This time it is the real economy that is affected.

“The reasons people, especially those that runs their own businesses, feel as though the recent crisis is much harder is because it is affecting the real economy,” Yoon said. The pandemic came “when they have already been burdened by the sharp hike in the minimum wage.”

Technologies have been helped by the pandemic, and this could work against the interests of older Koreans already struggling to keep up.

According to a report released by McKinsey on Sept. 23, the majority of the 800 executives surveyed said adoption of digitalization and automation has been accelerated since the pandemic started.

These adoptions of technologies are expected to lead to companies hiring employees on contracts and for temporary positions.

The latest Statistics Korea’s data show that as of August this year online shopping amounted to 115.9 trillion won. Not only is that a 79 percent year-on-year surge compared to the first eight months of 2019 but equivalent to 86 percent of all purchases made in 2019.

But one-third of the self-employed business owners are aged 60 or higher.

According to a Statistics Korea analysis on self-employed in August last year, of the 5.66 million self-employed, 31 percent were people aged 60 or older. The situation is even worse for those that run shops alone, where those 60 or older accounted for 36 percent of the total, or 1.48 million.

People in their 50s were 30 percent of the total, and 63 percent were educated no higher than the high school level.

“We are currently in an era we have never experienced before,” said Moon Nam-joong, Daishin Securities senior analyst.

He said the biggest trend today is “survival” digitalization, where our daily lives are immersed the digital world.

“And these changes have become irreversible,” Moon said. “While in the past digital platform has been a tool of convenience, now it is a tool of survival.”

The Korea Small Business Institute in June highlighted the need to strengthen the digitalization and expand non-contact services for self-employed businesses.

“In the post coronavirus era, there’s a desperate need for policies for self-employed that meet the changing market structure caused by the new normal,” said Jung Eun-ae, a researcher at the Korea Small Business Institute.


Since the pandemic started, the government has quickly moved into prevent job losses and has provided support for the self-employed businesses.

It spent 11.2 trillion won in four supplementary budgets to secure jobs, including subsidies for companies keeping employees from being laid off as well as funding for people that have no unemployment benefits as well as special funding for young job seekers.

This additional budget is equivalent to 40 percent of the 25.5-trillion-won job-related budget from this year’s initial budget. The initial budget alone was not only a 21 percent year-on-year increase but it was a record level.

With the aggressive spending, the government’s balance sheet is stressed, especially as the payouts for the unemployed have been increased, from 50 percent of average pay to 60 percent. The payout period was increased by 30 days, taking unemployment benefits to 120 to 270 days from 90 to 240 days.

If another 1 trillion won of unemployment benefits are paid out this month, the allocation for the year would be gone. 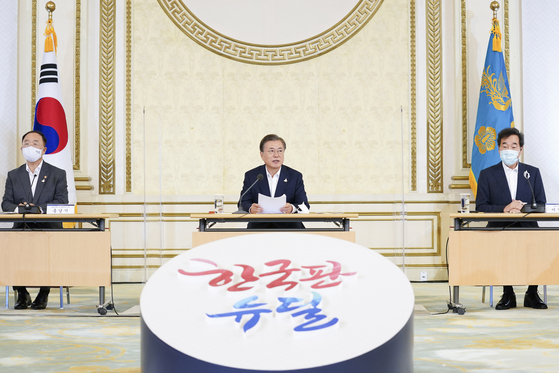 The solution that the government has proposed since the early stage of the pandemic was creating more public jobs.

The proposal first surfaced in April and became a policy in May.

The government on May 20 announced that it will commit 3.5 trillion won in the second half to create 550,000 jobs in the public sector and for youth in the non-contact and digital area.
This plan was further expanded to become this administration’s grand plan for the post-coronavirus era — the Korean New Deal.

Experts have urged the government to come up with more practical plans.

“If the economic stagnation continues, there would be a limit to sustaining jobs only with policies whose goal is to keep businesses from laying off employees,” said Kang Doo-yong, a senior researcher at the Korea Institute for Industrial Economics and Trade.

Park Chung-il, Hanyang University professor stressed that the government should be more focused on creating quality jobs instead of pouring money into creating government-funded jobs.

“The government is committing significant funding, but I can’t find plans that would create quality jobs,” Park said, adding that the current administration seems to be rushing for short-term results.

While past governments have made similar attempts, especially in times of crisis, the professor said they failed because the government-funded job projects were mostly focused on part-time jobs and senior citizens.

He said the public jobs created through taxpayer money are not what young people want.

“The best way to create jobs is to focus on supporting [private] companies,” Park said.