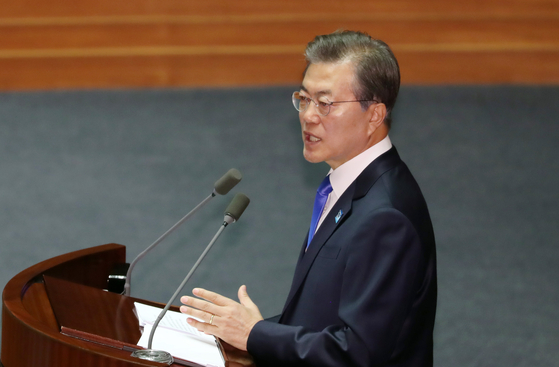 In this file photo, President Moon Jae-in delivers the budget speech at the National Assembly on Nov. 1, 2017.


President Moon Jae-in is scheduled to deliver a budget speech at the National Assembly on Wednesday, the Blue House said Tuesday.

“Moon will give the budget speech in the morning,” Blue House spokesman Kang Min-seok said. “He will stress the importance of strengthening the country's capabilities to overcome a crisis in his 2021 budget speech," Kang said.

Kang said Korea experienced an unprecedented crisis this year, but managed to contain it. “In February, Korea was the country with the second-highest number of [Covid-19] patients in the world,” Kang said. “But eight months later, we have become a model country that is successfully controlling and preventing the spread of infections.”

Kang hailed news that the country’s growth rate is rebounding. Earlier in the day, the Bank of Korea announced that the growth rate for the gross domestic product for the third quarter was 1.9 percent compared to the previous quarter, up from negative 1.3 percent in the first quarter and negative 3.2 percent in the second.

In his budget speech, Moon will express his appreciation to the public for keeping up hope in the unprecedented crisis, Kang said. “He will also want to tell the people how he will spend the next year’s budget to successfully fight the pandemic and help the economy recover at the same time,” Kang said.

As Moon will visit the National Assembly to deliver the speech, speculation grew that he may have a meeting with the opposition leader. A presidential aide said Tuesday that the Blue House has proposed a meeting with leaders of the ruling and opposition parties, but no schedule has been fixed.

“This is a matter in which the opposition’s position is important,” said the source. “Please wait and see how it turns out.”