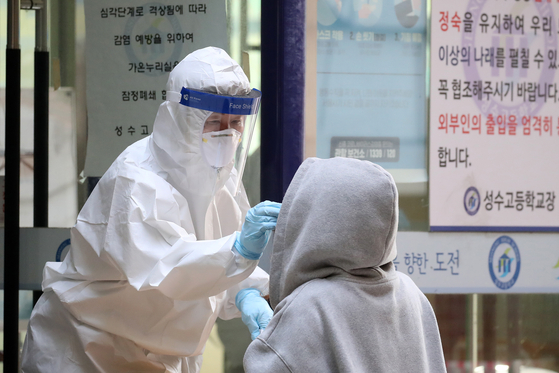 A student gets tested for coronavirus at a makeshift testing center at Seongsu High School in Seongdong District, eastern Seoul, Tuesday, after a high school senior tested positive. [NEWS1]

A golf outing by university alumni led to a cluster of 31 coronavirus infections as of Tuesday at noon, as new Covid-19 cases remained in the double digits.

A man in his 50s from Seongnam, Gyeonggi, tested Covid-19 positive last Thursday after attending an alumni golf gathering in Yongin, Gyeonggi, on Oct. 18, according to the Central Disease Control Headquarters Tuesday.

Health authorities said that some 80 people attended the golf outing and had a meal together after the round, likely contributing to the transmissions.

Of the 31 confirmed infections in the cluster, 18 attended the gathering, and 13 were family members or acquaintances.

Of a total of 72 domestic cases, 24 were reported in Seoul, 27 in Gyeonggi, six in Gangwon, five in Daejeon and five in South Gyeongsang. 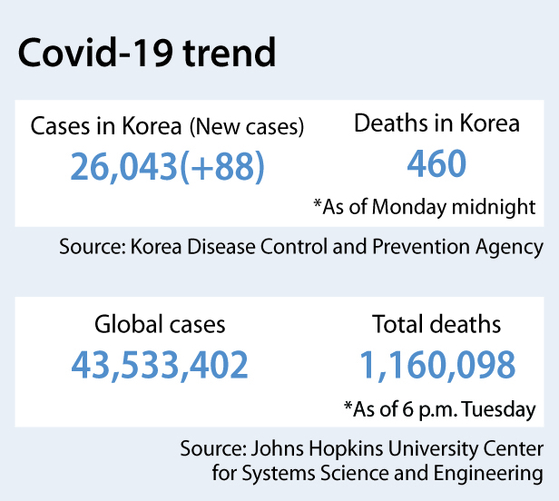 The total cases have reached 26,043, according to the Korea Disease Control and Prevention Agency (KDCA) as of Monday midnight. Three additional deaths brought the country's total fatalities to 460.

While the new cases dropped from 119 cases the previous day, cases were still up from 61 on Sunday.

The Seoul Metropolitan Government on Tuesday confirmed a cluster of nine people infected at a construction site in Songpa District, southern Seoul, and is currently testing 70 workers.

The city government said that the first case in the cluster was a resident of Yeongdeungpo District, western Seoul, who worked at the construction site and was confirmed Covid-19 positive last Thursday. A colleague then contracted the virus. His total contacts, including family and acquaintances, include 513 people.

A cluster of infections linked to a ballet hagwon in Bucheon, Gyeonggi, and a family in Guro District, western Seoul, added two cases, bringing total cases to 27 people.

Among the 16 new imported cases, seven were from the United States, three from Poland and two from India.

According to the KDCA, foreign nationals accounted for 43 percent of a total of 3,679 imported cases.