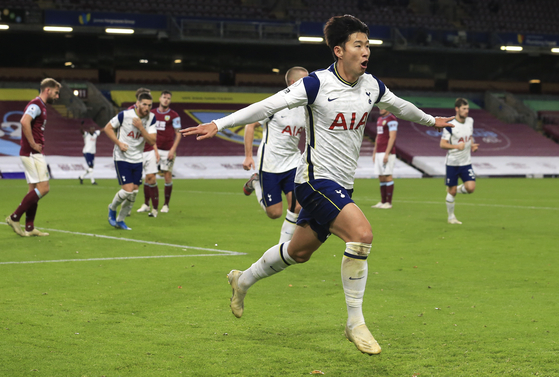 Son Heung-min of Tottenham Hotspur celebrates after scoring a goal during a Premier League match against Burnley at Turf Moor Stadium in Burnley, England on Monday. [AP/YONHAP]


Son Heung-min of Tottenham Hotspur seems to be unstoppable this season.

During Spurs’ English Premier League match against Burnley at Turf Moor Stadium in Burnley, England on Monday, Son scored the winner in the 76th minute to lead Spurs to another victory and another three points in the Premier League.

Things didn't start well for Spurs. The London club narrowly avoided falling behind in the 21st minute after Burnley’s Ashley Barnes scored but was called offside. Neither team managed to find the net for the rest of the first half and the score was 0-0 going into the break.

It wasn't until halfway through the second half that Son finally drew first blood, once again assisted by Harry Kane. Son's goal was the only one in the match and when the whistle blew Spurs were up 1-0.

Son has now scored eight Premier League goals this season, making him the highest-scoring player in the league this season.

“You know, we can always play good,” Son told Spurs TV after the game. “Remember the West Ham game, we played amazingly and drew. And it felt like we lost the game. But today, I think we’ve done a really, really good job and fought till the end. I think it’s a really good example.”

While Son highlighted Spurs' strong teamwork in the win against Burnley, a lot of praise was directed at him both during and after the game.

Gary Neville, the Manchester United legend and Sky Sports pundit summed up the footballing world's view on Son speaking after the game: “There is not a team in the world that would not take him.”

Just as Son pointed out Spurs’ performance in their recent Premier League match against West Ham, where they played to a 3-3 draw, head coach Jose Mourinho also discussed the match, referring to the draw as a loss.

With the three points, Spurs now move up to fifth in the Premier League standing with three wins, two draws and a loss, totaling 11 points.

“It was about getting one of the chances we had,” Mourinho told Spurs TV. “We didn’t have many, we scored one and we have three points."

Having played well and still played and still walked away with draws in their past two Premier League matches — against West Ham and Newcastle — Son praised his team for fighting until the very end to finally pick up a win.

“We lost last season,” Son said. “We showed really good character, a good fight until the end and a difficult place. You know, [it’s] Monday night, [it's] freezing, [it] was raining. I think it was [an] incredible win and this gives us a little bit more boost to be mentally strong.”

Along with Son’s scoring streak this season, his performance with Kane stands out.

Since Son joined Spurs in 2015, the Son-Kane duo has managed to score a total of 28 goals, which makes them the fourth most deadly scoring combination in Premier League history. Chelsea’s Didier Drogba and Frank Lampard hold the top spot in this category at 36, but looking at the Spurs duo’s performance this season, they could catch up any day now.

When Son scored four goals during Spurs’ match against Southampton in September, all four were assisted by Kane.

As for their Premier League match schedule, Spurs will be back at Tottenham Hotspur Stadium to take on Brighton on Nov. 1.