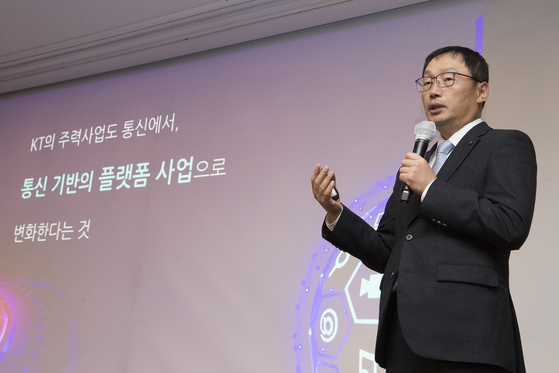 
Telecom operator KT will launch a new cloud computing service catering to corporate clients next month as part of its shift in focus in the face of declining revenue from landline and mobile network subscribers.

The service is designed to offer a wide range of functions powered by big data and artificial intelligence (AI) on a single cloud platform, the company said on Wednesday.

In line with the effort to strengthen the business-to-business sector, the carrier revealed its new brand KT Enterprise devoted to corporate clients.

Fixed-line and wireless networks accounted for half of KT's sales this year, down from 66 percent in 2016, as it develops new growth drivers, such as AI technology.

"We aim to reach 20 trillion won [$17.7 billion] in total sales by 2025," said KT CEO Ku Hyeon-mo in a briefing, adding that the company aims to maintain an equal share in sales from its new non-telecommunications businesses and from its traditional telecom businesses.

"KT will transform into a digital platform company from a telecom firm," Ku said.

The carrier has recently introduced a wide range of new tech services for businesses, including an AI call center solution, currently being used by insurance firm Lina Korea. It is also developing new robots, including for food service.

The company said its new efforts target the global market for the digital transformation of business services, which is expected to reach $2.3 trillion in 2023, according to the industry tracker International Data. It added that it aims to be the top company in the sector in the local market.

The announcement comes after KT said last year that it would transform itself as an AI company. The telecom giant formed an alliance with other companies, such as LG Electronics, and local universities to develop AI technology earlier this year.

The CEO also addressed worries surrounding the company's stock price being undervalued as it looks to shake off its telecom-focused image.

"Our key concern is that our company isn't being properly valued," Ku said. "We are making preparations for a renewed valuation, such as spinning off our subsidiaries, which will likely be clarified next year."