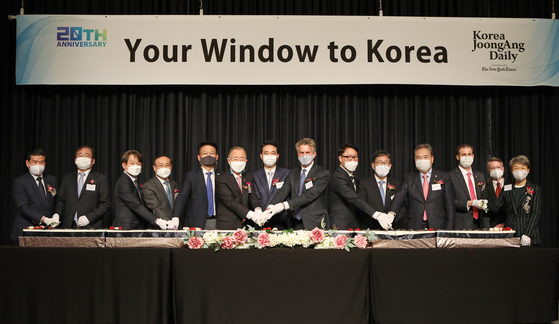 Former United Nations Secretary General Ban Ki-moon joined diplomats, executives and experts around the world in congratulating the Korea JoongAng Daily for its successful 20 years of keeping the world informed on issues and developments in Korea during its anniversary reception on Wednesday.

"It is a real pleasure whenever in the morning I pick up the Korea JoongAng Daily and The New York Times, among other Korean dailies, to check what is the top news," Ban told the audience at the Millennium Hilton Seoul. "In fact, this dissemination of information is so important that, in many countries […] the media is often called the 'fourth branch' of the government.

"In a country that was founded with checks and balances to prevent an all-powerful central government through the doctrine of the separation of powers into the executive, legislative and judicial branches, the 'fourth branch' moniker is a testament to the crucial role of the media," Ban said. "Considering how the Korea JoongAng Daily is playing this important role very well, as well as providing current developments and insights about Korea to outside readers, I would like to express both my appreciation and congratulations for your 20 years of service." 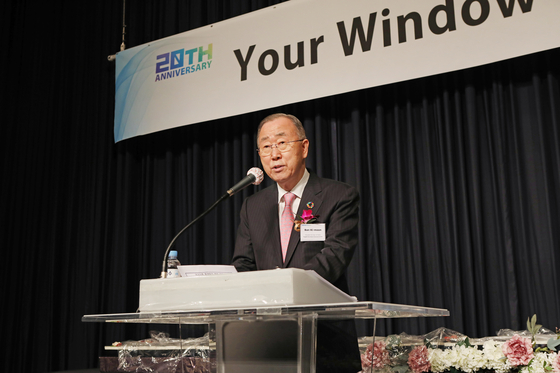 Ban Ki-moon, president and chair of the Global Green Growth Institute and former secretary-general of the United Nations, congratulates the Korea JoongAng Daily on its 20th anniversary at the reception on Wednesday. [PARK SANG-MOON]

Ban, the eighth secretary-general of the United Nations and the current president and chair of the Global Green Growth Institute, was joined by ambassadors, executives, ministers and representatives from The New York Times, the Korea JoongAng Daily's partner.

"I remember very well when we started this relationship," said International President of The New York Times Company Stephen Dunbar-Johnson. "We provided readers our signature IHT [International Herald Tribune], which is now of course the International New York Times, while the Korea JoongAng Daily provided the best local coverage from the region. We felt that that combination would be very compelling. The fact that we are celebrating 20 years of fruitful collaboration bears that out."

The New York Times' partnership with the Korea JoongAng Daily was the first among its collaborations with local media outlets in Asia. Next year, it plans to move part of its Hong Kong office to Seoul.

"South Korea, in some reports, now rises above countries like Australia on the issue of freedom of expression, with significant advances in press freedom over the past decade in the South," said Dunbar-Johnson. "Other indicative metrics, such as the World Press Freedom Index, sees Korea outshine many other regions in Asia, including Taiwan, Japan, Hong Kong, India and Singapore, with respect to level of freedom available to journalists. Again for us this was a critical metric in making our decision to locate our digital hub here in Asia." 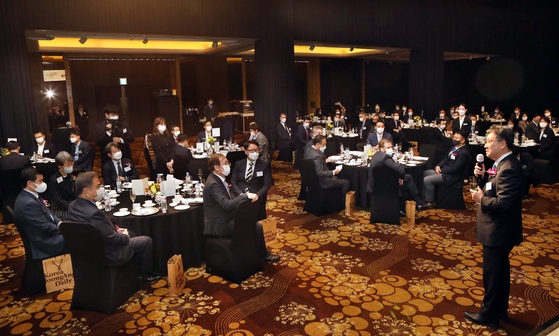 Minister of Culture, Sports and Tourism Park Yang-woo emphasized the importance of having English-language media outlets in Korea.

"I am very happy to join this wonderful occasion and would like to offer my warmest congratulations to the Korea JoongAng Daily," said Minister Park in his address to the audience. "The daily has been providing quality English-language journalism, and it has helped the international community in Korea and beyond to better understand our country and our culture. As people all over the world are becoming increasingly curious to learn more about K-drama, K-pop as well as our beautiful cultural heritage, I salute your efforts at the Korea JoongAng Daily and look forward to your continued success for the decades to come." 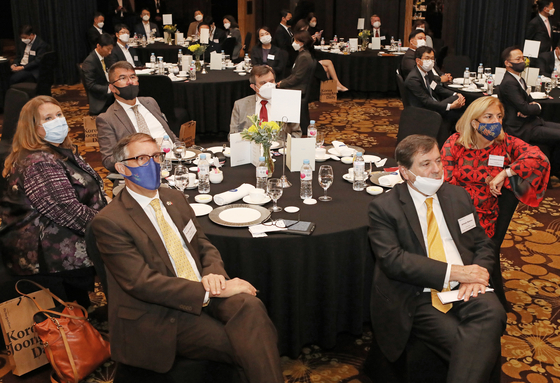 Members of the diplomatic corps also emphasized the role of English-language media in Korea to shape the image of the nation worldwide.

"The Korea JoongAng Daily is an important source for not only the diplomatic community but all foreigners living in Korea," said Mozes Csoma, ambassador of Hungary to Korea. "Every day it provides not only important insights about the country in its present form in the 21st century but also about the history of the Korean Peninsula and its culture." 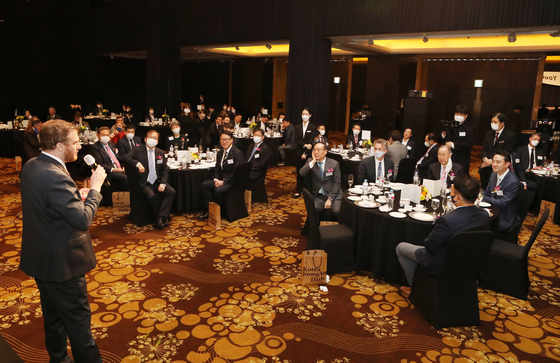 Mozes Csoma, ambassador of Hungary to Korea, offers a toast to the audience at the 20th anniversary reception of the Korea JoongAng Daily. [PARK SANG-MOON]


The Korea JoongAng Daily was founded in 2000 with the vision of being the concise, well-written and authoritative English-language daily. In celebrating its 20th birthday, the paper announced its commitment will not waver in the future.

"The Korea JoongAng Daily promises to be the newspaper that they can trust to cover the full spectrum of issues at hand in Korea and provide in-depth understanding of everything that is taking place here," the paper stated in its 20th anniversary video message. "Whether in print, online or on any of the other platforms that we now share our news through, we will be the one-stop shop for any and all issues related to Korea. Wherever in the world you are, the Korea JoongAng Daily is 'your window to Korea.'" 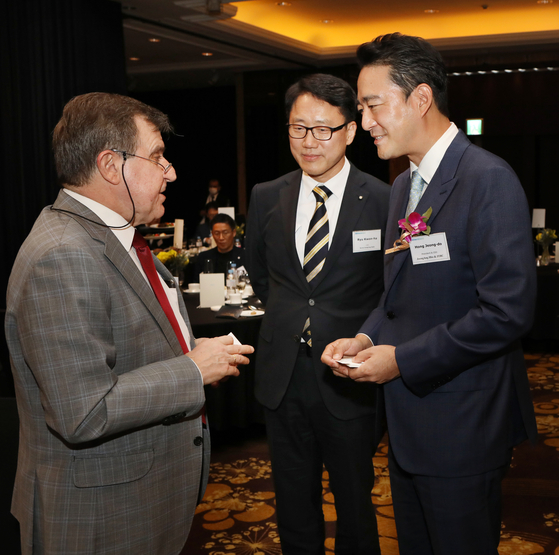 From right, Hong Jeong-do, president and CEO of the JoongAng Ilbo and JTBC; Ryu Kwon-ha, CEO of the Korea JoongAng Daily; and Andrey Kulik, ambassador of Russia to Korea at the anniversary reception. [PARK SANG-MOON]

The video recounted some milestones in the past two decades, including its coverage of major international events such as the PyeongChang Winter Olympics in 2018 and the FINA World Aquatics Championships in 2019, as well as its efforts to bring together members of academia, public offices and the private sector to discuss the latest issues on Korea, such as its annual Korea Economic Forum, Public Diplomacy Night and the Anti-Corruption Forum.

Members of the paper's leadership said they look forward to the years ahead, in which they expect the paper will come to play an important role in the ever-changing geopolitical circumstances of the region. 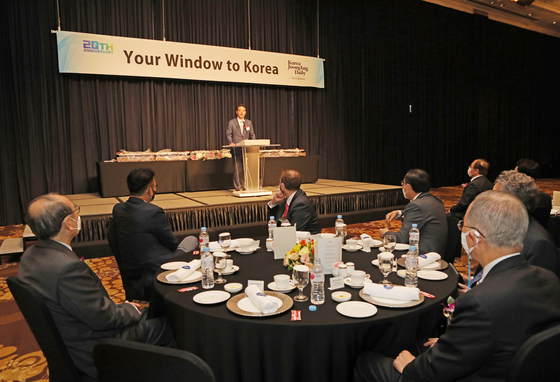 Hong Jeong-do, president and CEO of the JoongAng Ilbo and JTBC, addresses the audience at the Korea JoongAng Daily’s 20th anniversary reception at the Millennium Hilton Seoul on Wednesday.[PARK SANG-MOON]

"The Korea JoongAng Daily may be the youngest of the three English-language newspapers in Korea, but it is now the English daily with the highest circulation in Seoul, according to the Korea Audit Bureau of Certification," said President and CEO of the JoongAng Ilbo and JTBC Hong Jeong-do. "In the years ahead, the Korea JoongAng Daily will introduce Korea to an even wider global audience as the nation evolves into an international hub in Asia, the role that Hong Kong and Singapore played in the past. […] As we look forward to the next 20 years, the Korea JoongAng Daily aims to become the exemplary English-language newspaper in the Asia-Pacific region that will continue to deliver news on Korea in a trustworthy and comprehensive manner to the globe." 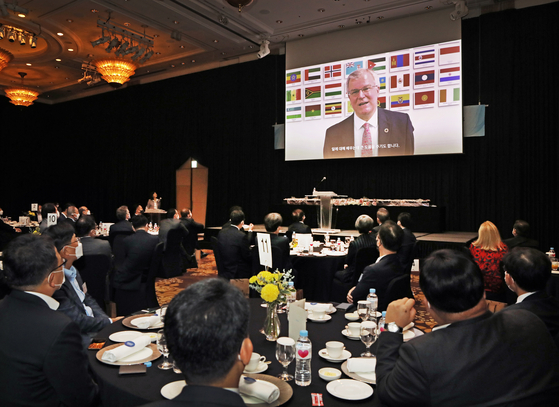 Simon Smith, British ambassador to Korea, conveys a congratulatory message to the Korea JoongAng Daily at the reception on Wednesday. [PARK SANG-MOON]

"The Korea JoongAng Daily has further served as a bridge between Korea and foreign countries through our popular annual diplomacy series, currently in its fifth year, and close communication with the diplomatic corps in Seoul," said CEO of the Korea JoongAng Daily Ryu Kwon-ha. "In the next 20 years, we will continue to commit to our motto of being 'your window to Korea' as the most reliable and authoritative source of news on Korea to the international community."