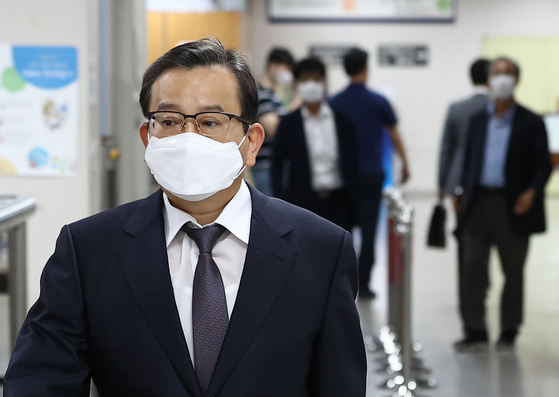 Kim Hak-eui, who served six days as vice justice minister under former President Park Geun-hye, enters the Seoul High Court for his appeals trial sentencing on Wednesday. The court overturned his past acquittal and placed him under pretrial detention on a bribery conviction that day. [YONHAP]


Former Vice Justice Minister Kim Hak-eui, the figure at the center of one of Korea’s biggest political sex scandals, was placed under pretrial detention Wednesday after an appellate court overturned his earlier acquittal on a bribery charge.

Kim, who briefly held the No. 2 post at the Justice Ministry, was arrested in May last year and charged with receiving sexual favors and bribes worth around 130 million won ($110,000) from 2006 to 2009, when he was a senior prosecutor.

Though he was freed in November that year after a district court acquitted him of multiple bribery charges, the Seoul High Court on Wednesday ruled there was sufficient evidence to convict Kim on one of the bribery charges.

The court sentenced him to prison for two years and six months, along with a fine of 5 million won, and ordered that he be placed under pretrial detention pending another appeal.

“As a high-ranking government official and a senior figure in the state prosecution service, former Vice Minister Kim should have carried out his duties with the utmost ethical standards and integrity,” read the court statement.

“But the nature of his crimes is not light, given that he received over 40 million won in financial profits over an extensive period in exchange for acting as a mediator.”

Once a rising star in the conservative Park Geun-hye administration, Kim resigned from his post as deputy justice minister in March 2013 after just six days, after a video circulated that appeared to show him engaging in sexual intercourse with a woman at a party.

Kim denied any involvement, but police later said the video was taken during one of his frequent visits to a private villa in Wonju, Gangwon, owned by construction contractor Yun Jung-cheon, who allegedly hosted parties where he offered influential figures sexual favors with women Yun had blackmailed or drugged.

While the allegations were enough to create a political firestorm, the state prosecution service abruptly shut down all criminal proceedings into Kim and Yun months later that November, citing a lack of evidence proving the figure in the video was the former vice minister.

That decision was fiercely panned at the time by the liberal opposition as demonstrating that the state prosecution service lacked impartiality and was politically motivated — arguments that continue to be at the heart of the now-ruling Democratic Party’s prosecutorial reform drive.

And after Park was impeached and Moon Jae-in won the Blue House by a landslide, the new president revived the investigation into Kim, ordering a thorough investigation of both the original allegations and whether there had been a cover-up.

The renewed inquiry eventually led to prosecutors indicting Kim in June 2019 on several counts of bribery, including that he allegedly received sexual favors from multiple women on 13 different occasions from July 2006 to December 2007; received a total of 31 million won from Yun in the form of cash, checks and valuables like a painting and luxury clothing; convinced Yun to clear up 100 million won of debt owed by a woman surnamed Lee to Yun and additionally took 43 million won in bribes from another businessman surnamed Choi from October 2000 to May 2011.

In return, prosecutors argued Kim tried to lift pressure on Yun in a criminal investigation he was facing.

But the Seoul Central District Court in November 2019 acquitted Kim on all counts of bribery, saying that the 10-year statute of limitations for the sexual favors and most of the bribes had passed, and that there was a lack of evidence to prove the other allegations.

The court did acknowledge however, that the figure in the video was indeed Kim, and suggested that prior prosecutorial investigations during the Park administration had been improperly carried out.

The Seoul High Court on Wednesday upheld most of these rulings, save for the 43 million won Kim allegedly received from Choi, which the court said remained within the statute of limitations since the bribes had continued until 2011.

In addition, the court noted the significance of the case lay not only in prosecuting bribery from nearly a decade ago, but also because it sheds light on illegal favor trading between prosecutors and business figures termed as “sponsors.”

The ruling marked the first time Kim has been convicted after three separate prosecutorial investigations — the first two having fizzled out amid allegations of cover-ups under the previous administration.

Yun also remains under detention after his appeal in May ended with his conviction for bribery and rape. He was sentenced to five years and six months in prison, but he has appealed the conviction to the Supreme Court.

Kim’s lawyers on Wednesday also pledged to appeal the case a final time at the Supreme Court, saying they were blindsided by their client’s conviction on an unexpected bribery count that was not discussed at length at Kim’s first trial.

How to go against the tide