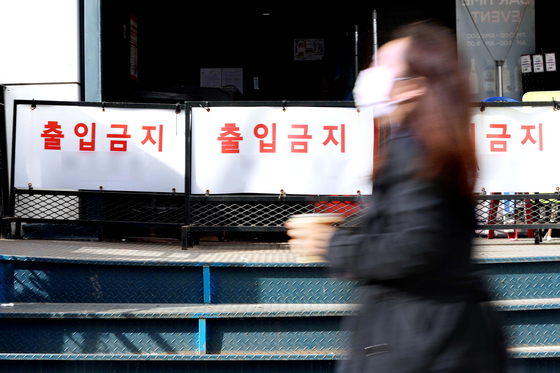 Signs reading "No trespassing" block the entrance of a nightclub in Itaewon, central Seoul, on Wednesday ahead of Halloween. [NEWS1]

The Seoul Metropolitan Government said Wednesday it's in talks with local nightclub operators to temporarily shut down their businesses this weekend in time for Halloween amid fears of young partygoers spreading the coronavirus.

Park Yoo-mi, the city government’s director of public health, said in a press briefing that negotiations were ongoing between Seoul and the operators of some 153 nightclubs and other bars where dancing and table-hopping are common to close this Friday and Saturday.

As of the Wednesday press briefing, none had announced that they would fully close their doors over the weekend, she said, but “there are a lot of places that have shown interest” in the idea.

Some nightclubs uploaded notices on their social media accounts announcing temporary closures, but some have reportedly given mixed messages as to whether they are entirely ditching all indoor and outdoor party activities.

This year’s Halloween falls on Saturday, stoking fears among health officials that the parties could lead to another large-scale cluster of coronavirus infections, such as the one that emerged last May from Itaewon clubs in Yongsan District, central Seoul. Officials were able to confirm nearly 300 Covid-19 cases as having been linked to that cluster.

Both Itaewon and Hongdae in Mapo District, western Seoul, are popular among Koreans and foreigners for their vibrant nightlife. On Halloween, the areas are known to attract tens of thousands of young revelers in costumes, though the vast majority of the Korean public doesn’t celebrate the occasion.

To prevent another club outbreak, Park said the city was teaming up with all 25 districts to comb through each area’s clubs and dancing bars this week and check whether they’re abiding by the government’s sanitation and social distancing guidelines.

From Thursday to Saturday, 108 clubs and dancing bars in the city that are popular among young people will be monitored even more closely, added Park, who stressed that two public servants will be assigned to each business for the task.

Any businesses busted for violating the guidelines will be immediately slapped with a two-week operation ban. 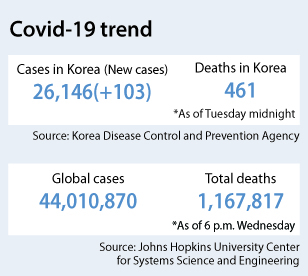 In Itaewon, Park said barricades will be set up around the neighborhood’s streets that are most popular among Halloween revelers so that passers-by will have to scan a QR code with their mobile phones in advance and get their temperatures checked.

The stiff warnings came as the Korea Disease Control and Prevention Agency (KDCA) announced that 103 new cases of the coronavirus were added nationwide Tuesday, up from 88 the day before.

Of those cases, 96 were domestic infections: 28 in Gyeonggi, 23 in Seoul, 14 in Gangwon, 10 in Incheon, seven in Daejeon, five in North Gyeongsang, three each in North Jeolla and South Gyeongsang, two in Daegu and one in South Chungcheong.

Among the rest, all imported cases, two each were from the Philippines and Ethiopia, while one each was from Jordan, Turkey and the Netherlands.

One person died Tuesday, bringing Korea's total deaths from the virus to 461, while 92 people recovered, raising overall recoveries to 24,073.

Two workers at the Seodaemun Public Health Center in western Seoul tested positive for the coronavirus Wednesday morning, prompting the center to shut down, but the district said the employees hadn't had any direct contact with visitors to the facility.