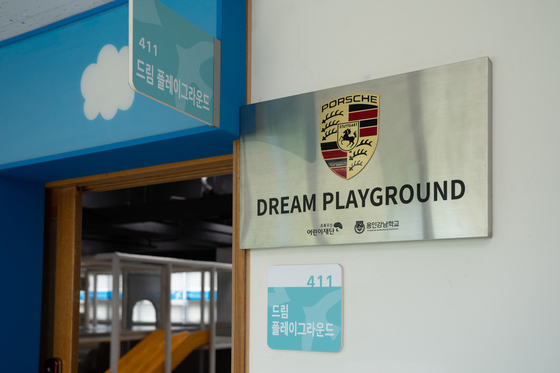 
High-performance sports cars are designed to be loud, brash and often abrasive, but German automaker Porsche is keen to show off its softer side.

Since 2017, the luxury automaker has donated a total of 1.25 billion won ($1.1 million) to charitable projects in Korea. It was the second-largest donator among import car brands in Korea last year, based on the portion of donations made per entire revenue generated domestically.

In terms of Porsche’s corporate social responsibility (CSR) activities in Korea, 2017 was a meaningful point as it was when the company launched its first long-term CSR campaign “Do Dream.”

Porsche’s Do Dream campaign has put a lot of focus on supporting children and students across Korea, including scholarships for young talents in sports and the arts, as well as paying for the construction of school gyms.

One of the projects conducted under the Do Dream initiative is the “Dream Playground,” which aims to build gyms where children can spend time after school. Currently, Porsche has established six Dream Playgrounds in Korea, with two completed this year for children in need of special care.

The last facility opened in July, for example, is located in Saesol School in Gimpo, Gyeonggi, which is home to 197 students with developmental disabilities.

The 73 square-meter (786 square foot) space was built specifically for Saesol’s students, from the remodeled floors to the equipment and rides installed at the site. A part of the playground is dedicated to instruments that can help sensory development in language, cognition and learning skills.

This year, the company also lent a helping hand to combat the Covid-19 pandemic in Korea: As a matching grant, Porsche and its four official dealers donated 100 million won each to deliver disinfection kits to 1,135 children from underprivileged households and welfare centers nationwide and delivered a total of 90 million won to 100 families over the course of three months.

"This contribution is not a one off as Porsche Korea will continue its efforts to contribute more to Korean society in various areas such as education, culture and environment in line with the core brand value, sustainability,” said Porsche Korea CEO Holger Gerrmann.

Next year, the carmaker plans to push the boundaries of its CSR activities once again, by expanding the scope of beneficiaries of its existing Do Dream campaign and increase activities in regards to the value of sustainability, it said.

The Dream Playground, for example, was a project restricted to schools inside the Seoul metropolitan area, but will be extended to more rural areas, including mountains and islands from 2021.

“Among the projects we newly plan to launch next year is adding financial support in purchasing tickets for cultural events and organizing gardens at city centers,” said Porsche.