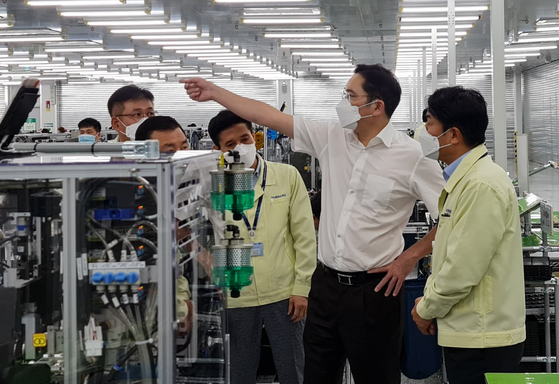 
Analysts are starting to crunch the numbers on the estate of Lee Kun-hee to see what’s what and whether his passing will be of significance to Korea’s largest company, Samsung Electronics.

He held a portfolio of shares in related enterprises worth an estimated 18 trillion won ($15.9 billion), with the vast majority of that in three listed entities: Samsung Electronics, Samsung C&T and Samsung Life Insurance. Based on the current tax rate, an estimated 10.6 trillion won could be due in taxes.

Gaming out scenarios, a number of possibilities exist, including the donation of shares to a foundation, borrowing funds to finance the inheritance and a massive restructuring of the family’s stockholdings.

The Korean public has weighed in, with a petition posted to the presidential house asking for the waiving of the tax. The proposal garnered over 20,000 signatories, but others say that the tax should be in place to prevent a concentration of wealth in a small group of families.

Korea’s inheritance tax rate is progressive up to 50 percent, with surcharge tacked on for major shareholders, taking the rate to as high as 60 percent.

No information has been released about how the money is to be divided, and Samsung Electronics has declined to comment. All that is really known is that Lee Kun-hee’s heirs are his children — Lee Jae-yong, Lee Boo-jin and Lee Seo-hyun — and that a plan for the payment of the tax must be submitted to the National Tax Service by April 2021.

The assumption is that no bold moves will be made by the family members to fiddle with the shareholdings, as they have had trouble in the past with aggressive attempts to adjust ownership stakes and have promised not to do that again.

“So, the junior Lee would not go the extra mile — such as a shake-up in corporate governance through mergers and acquisition,” he said.

Despite the low possibility of a bold intervention by family members, analysts say there could be changes in stock ownership in the process of inheritance.

The overall structure is complicated and unwieldy. It is far from transparent and is potentially unstable, especially given the large international ownership in Samsung Electronics.

Many assume that the family shareholders will divide the tax into six payments over the five years, although they still have to pay around 1.8 trillion won every year. To finance the tax, the family may attempt to increase the dividends of companies in which they own stock.

Some bean-counters say that the numbers just don’t add and that the heirs will have to sell shares to pay the tax.

The value of the patriarch’s shares in the life insurer and C&T pales in comparison to the value of his holdings in the electronics company, so the focus is on the 4.18 percent stake in Samsung Electronics worth around 15 trillion won, which would attract approximately 9 trillion won of tax, according to Jeong.

Lee Jae-yong himself owns only 0.7 percent in Samsung Electronics.

“It will be inevitable to offload a part of the inherited stock in Samsung Electronics to finance the massive tax,” Jeong said.

Others believe they would opt to hold to be on defensive against the influence from outside forces, such as a hedge fund.

The proposed amendment to the insurance law will impact how the inheritance issue unfolds.

The bill, introduced by members of the ruling Democratic Party, could force Samsung Life Insurance to sell the vast majority of its shares in Samsung Electronics.

Currently, an insurance company is only permitted to invest a maximum of 3 percent of its assets in a related company, based on the acquisition cost. The reform will change the standard from the acquisition cost to the current market price, a system currently used for banking and securities companies.

Samsung Life Insurance’s holding in Samsung Electronics is permitted under the current law because it cost around 569 billion won at the time of purchase, less than 3 percent of the company’s net assets.

But when the holding is converted to the current market value, it balloons to around 29.5 trillion won, well above the 3 percent limit.

When the pending bill passes, the insurance unit will be forced to sell more than 15 trillion won worth of shares.

“The most likely scenario is that Samsung C&T comes in to buy the life insurer’s shares in Samsung Electronics,” Moon said, adding that a high corporate tax for the acquisition could stand as a burden.

Others raised the possibility of leaving a part of the stocks to Samsung’s charitable foundation to avoid tax.

“If the family transfers the stocks to a charitable foundation, it will be exempt from inheritance taxation if the shares are worth less than 5 percent of the entire stock,” said Eun Kyung-wan, an analyst at Meritz Securities.

“This is a possible option,” he said.