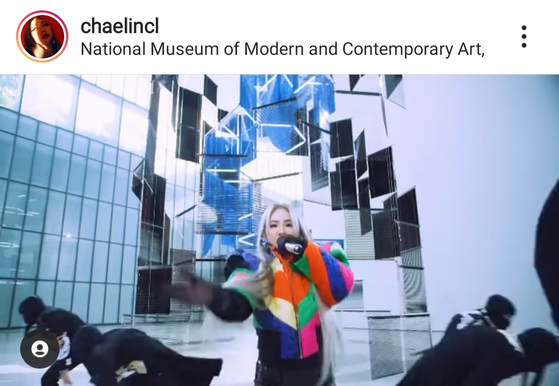 
Rapper and singer-songwriter CL performed her latest song “HWA” for the very first time on “The Late Late Show with James Cordon” at 4:30 p.m. on Thursday, marking her second appearance on the show.

Due to the Covid-19 pandemic, the “HWA” performance was filmed in Korea, at the space for the ongoing solo exhibition of the famed artist Haegue Yang at the National Museum of Modern and Contemporary Art (MMCA) in Seoul, and Jongchinbu, a Joseon Dynasty (1392-1910) building within the museum.

In an online press event for the release of her two singles “HWA” and “5STAR” on Thursday, CL thanked the host for inviting her back to the show.

“I first appeared on the show four years ago,” she said. “I think it was the first time ever for a female solo K-pop artist. It was very meaningful [for me] to be invited again.”

She said that the CBS show called her first after hearing the news that she will be releasing new songs.

Her two tracks were released at 1 p.m. on Thursday on local music streaming sites.