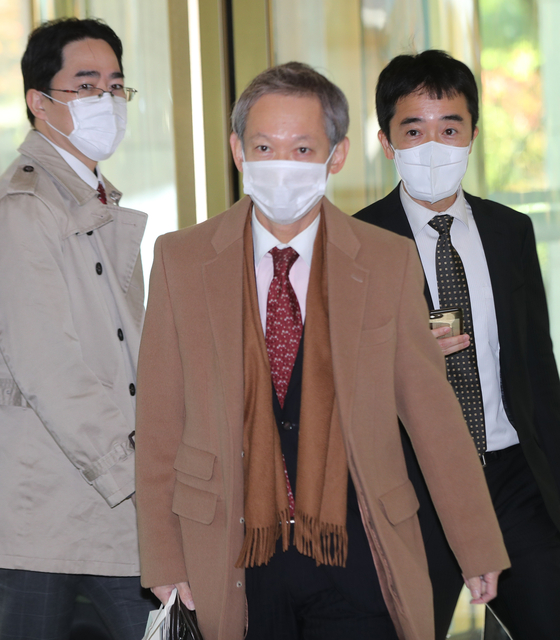 
Korean and Japanese diplomats struggled to make progress on the forced labor compensation issue in their first face-to-face talks since the onset of the pandemic and the inauguration of Japan's new prime minister.

Kim Jung-han, director-general for Asian and Pacific affairs at the Korean Foreign Ministry, in talks in Seoul Thursday with his Japanese counterpart Shigeki Takizaki, stressed the importance of a trilateral summit between the leaders of Korea, Japan and China set to be hosted by Korea later this year.

Japan has been strongly objected to the selling of seized assets owned by Nippon Steel in Korea to compensate Korean wartime forced labor victims who were victorious in a 2018 Korean Supreme Court ruling.

In a statement Thursday, Seoul’s Ministry of Foreign Affairs said that Korea explained its position that the “Japanese government and the defendant companies need to show more sincerity toward resolving the issue” of forced labor compensation and urged Japan to lift export restrictions.

Japan claims that all issues related to compensation were resolved in a 1965 treaty that normalized bilateral relations. Tokyo implemented a series of export restrictions on Korea since July 2019, seen as retaliation to the forced labor issue. Japan has warned that more measures could follow should the liquidation process begin.

According to the ministry, Kim explained “the Korean government’s efforts to hold a Korea-Japan-China summit within the year and reminded the Japanese government of a need for its active support.”

Takizaki, director-general at the Japanese Foreign Ministry's Asian and Oceanian Affairs Bureau, arrived in Seoul for a three-day visit Wednesday, after last meeting with Kim in February, before the coronavirus pandemic. They held a virtual meeting in June.

Yoshihide Suga, who became prime minister last month, called South Korea “a very important neighboring country” in an address to the Japanese Diet earlier this week. But Suga has also reportedly indicated that he doesn’t plan on attending a trilateral summit with China hosted in Korea over the forced labor issue, showing a hawkish stance similar to his predecessor, Shinzo Abe.

A massive earthquake and tsunami that struck on March 11, 2011, resulted in a meltdown at the Fukushima Daiichi nuclear plant. Japan has been delaying plans to release the contaminated water stored there amid fierce protests domestically and among international environmentalists.

The ministry said that the two sides agreed that it is “important to continue communication and consultations to resolve various issues” through dialogue between diplomats.