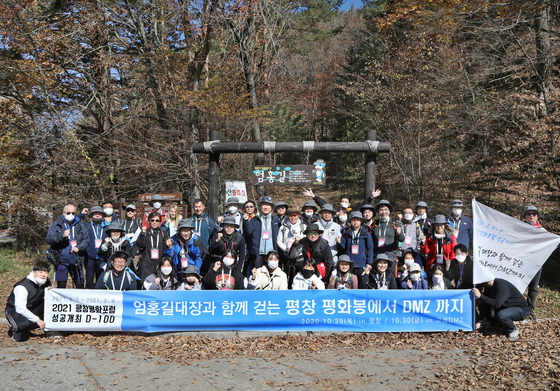 Members of the PyeongChang 2018 Legacy Foundation, Pyeongchang County Office and the diplomatic corps at the start of their hike at Mount Balwang in Pyeongchang, Gangwon on Thursday to hike for peace on the Korean Peninsula. [PARK SANG-MOON]


A hike to commemorate the spirit of peace of the PyeongChang Winter Olympics was led Thursday by none other than mountaineer Um Hong-gil, the first Korean to climb the world’s 16 highest points.

“We will be climbing today the beautiful Mount Balwang to commemorate the 100 days left until the PyeongChang Peace Forum in 2021,” Um told the participants at the opening ceremony of the event at Yongpyong Resort in Pyeongchang, Gangwon — one of the sites for the 2018 PyeongChang Winter Olympics. “This is the very site where we once celebrated the spirit of peace and cooperation during the Olympics. The whole world is struggling in the Covid-19 pandemic, but there is always a way forward and I am sure we can and we will find that way together.”

The hike was organized by the PyeongChang 2018 Legacy Foundation, which hosts the annual PyeongChang Peace Forum, launched after Korea's Winter Olympic Games in 2018 in Pyeongchang. Korea’s capital city Seoul had previously hosted the Summer Olympics in 1988.

The forum brings together speakers from all over the world to discuss the topic of peace. During the last forum, held in February, participants heard from speakers including Ban Ki-moon, former secretary-general of the United Nations, and Gro Harlem Brundtland, the former prime minister of Norway.

Thursday marked 100 days before the launch of next year's forum, to be held from Feb. 7 to 9 at the Pyeongchang Alpensia Convention Center.

“It is with great pleasure that we welcome everyone here who gathered to show their support for peace in the Korean Peninsula,” said Kang Hyo-duk, deputy county governor of Pyeongchang. “It is no coincidence that the summit of Mount Balwang is named pyeonghwabong [peace summit]. And what a great occasion it is to be led by Um, to hike the trail named after him on the mountain, to reach the summit together.”

Um has scaled Mount Everest, the world’s tallest peak, three times. In 2001, he became the ninth climber to summit all 14 peaks higher than 8,000 meters (26,247 feet) in the Himalayas, collectively called “eight-thousanders.”

Members of the public in Pyeongchang, including students, public officials and diplomats, joined the event to hike for peace in the Korean Peninsula on Thursday.

“Guatemala will be commemorating next the 25 years of the signature of the peace agreement,” said Marco Tulio Chicas Sosa, ambassador of Guatemala to Korea, referring to the December 1996 Guatemalan Peace Accords. “It is a responsibility for us to support all efforts around the globe in order to promote peace — we are very supportive with the efforts of Korea in promoting peaceful unification and particularly for peace in the Korean Peninsula.”

“[Members of the diplomatic corps] are often the bridge between the world and Korea, and given the unique geopolitical situation that Korea finds itself in, you know very well how much peace means to the Korean Peninsula,” he addressed the participants at the opening ceremony of the hike. “This commemoration we are holding today is to mark the 100 days we have before us until the peace forum. We hope that the beautiful scenery of Gangwon that you experience will encourage you to continue to work for peace for the Korean Peninsula.”