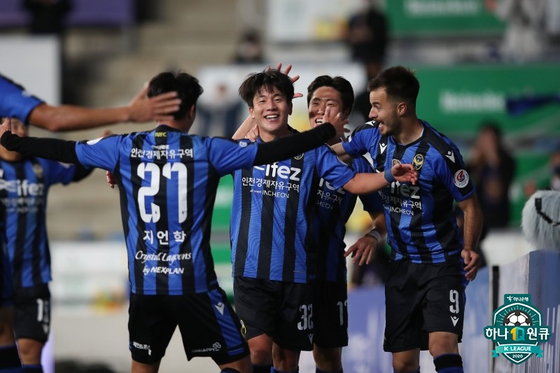 Incheon United players celebrate after scoring a winner during their match against Busan IPark at Incheon Football Stadium in Incheon on Oct. 24. [YONHAP]


There will be plenty of scoreboard watching and number crunching come Saturday afternoon, as three clubs at the bottom of the K League 1 table will look to avoid relegation in their final matches of 2020.

Each with one match to go this season, Incheon United, Seongnam FC and Busan IPark are all in danger of getting sent down to the K League 2 for 2021.

They and three other clubs in the bottom half of the table, grouped as Final B, will finish their season on Saturday. Those in the upper tier, Final A, will do so on Sunday.

The last-place club in the 12-team K League 1 will suffer that ignominy. Incheon are currently occupying that spot — as they have for most of the season — with 24 points. Busan and Seongnam are both just one point above Incheon. Busan own the tiebreak advantage over Seongnam, thanks to a 24-22 edge in goals scored.

As fate would have it, Busan and Seongnam will clash on Saturday for their season finale at Tancheon Sports Complex in Seongnam, Gyeonggi. Incheon will take on FC Seoul at Seoul World Cup Stadium. Both matches will kick off at 3 p.m., which will likely leave fans in the stands at these stadiums distracted as they keep glancing at the other score on the board or on their phones.

Over the years, Incheon United have built a reputation as the great escape artist, barely avoiding relegation with some late-season surge. They flashed some of that flair for the dramatic last weekend, when they netted two second-half goals just a minute apart for a 2-1 victory over Busan to stay alive in the survival battle.

To stay with the K League 1 big boys for another season, Incheon will need some help from the Busan-Seongnam match. There are multiple scenarios in which Incheon can avoid relegation.

First, if Incheon defeat FC Seoul, and Busan and Seongnam end up in a draw, Incheon and Busan, with 28 points and 26 points, will stay put. Seongnam, who will also have 26 points but will lose the tiebreaker to Busan, will be relegated.

Also, if Incheon prevail on Saturday, they and the winner of the Busan-Seongnam match will avoid relegation, with the losing club going down to the K League 2.

Finally, there is also a path for Incheon to stay in the K League even if they play FC Seoul to a draw. Incheon will have 25 points in that case. The loser from the Busan-Seongnam match will also finish with 25 points, and that team and Incheon will go to the goals scored tiebreaker to determine who will be relegated.

Currently, Busan and Incheon each have 24 goals, and Seongnam have 22.

For Busan or Seongnam, the math is straightforward. The winning team of that match will stay in the K League 1. But if Incheon lose to FC Seoul, then both Busan and Seongnam will get to play in the K League 1 next year regardless of their Saturday result, and Incheon will be relegated.

Since the promotion-relegation system was introduced in 2013, Incheon have never been relegated. Busan just got promoted for this season after toiling in the K League 2 for four years. Seongnam spent the 2017 and 2018 seasons in the second division.