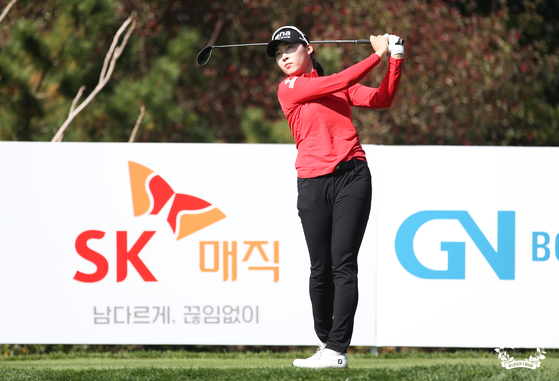 Kim You-bin watches her shot during the first round of the SK Networks Seokyung Ladies Classic at Pinx Golf Club in Jeju on Thursday.


JEJU — Jeju's notoriously strong fall winds held off for the first round of the SK Networks Seokyung Ladies Classic, with just a stiff breeze sweeping across the course as Kim You-bin took a one-shot lead on Thursday.

Four under clearly wasn't enough for Kim as she didn’t waste any time further lowering her score. Kim added another birdie on the par-3 second and with back-to-back birdies on the par-3 fifth and the par-4 sixth, she successfully managed to shoot a bogey-free round of seven-under-par, 65.

“It was a day where I could do my shot the way I wanted,” Kim said. “I think my condition is up to par. I was hitting my tee shot consistently well and was hitting my second shot especially well. Along with that, since I was putting well too, I think I was able to see good results.”

Kim is a rookie on the KLPGA Tour this season and is ranked sixth on the Tour’s rookie points standing. She seems to be at the top of her game as she’s just had her best finish this season last week. Prior to this tournament, her best finish was sixth at the 2020 Huencare Ladies Open which was held just last week.

With 762 points, Kim is far from winning the Rookie of the Year award, as Ryu Hae-ran holds a dominant lead at 1,602 points. Despite the big gap in the rookie points standing, she isn’t giving up on her shot at the once-in-a-lifetime award.

“There is a big gap but since the remaining tournaments are all big, I think I have a shot at it,” Kim said. “I want to play my best until the very end.”

As this is only the first round of the tournament, anything can change, but Kim says that her goal is to take good care of her physical condition and be consistent throughout all four rounds.

Looking at her performance this season, this is the second time that Kim has finished the first round as leader. Back at the Jeju Samdasoo Masters in August, she also shot seven-under-par after the first round to be tied for the lead.

Hwang Yul-lin followed Kim in second, just one shot behind at six-under-par, 66.

"There were mistakes, but I also hit great shots so I want to compliment myself," Hwang said. "I think I shot a great score. I'm satisfied."


Despite the postponement of the 2020 KLPGA Tour season due to the coronavirus, this is already the 16th tournament of the season and the 13th edition of the SK Networks Seokyung Ladies Classic.

The third and the fourth round will be played at a slightly longer 6,684 yards.

Defending champion Choi started her tournament at two-under-par, 70. Choi had a disappointing finish on the very last hole, as she hit into the hazard and finished with a triple on the par-4 18th.

Choi, who won five tournaments throughout the 2019 season alone, is yet to pick up a win this year. She’s managed to play consistently by recording multiple top-10 finishes but has been falling short when it comes to winning.

Kim Hyo-joo, who won the KLPGA Tour’s final major of the season at the KB Financial Group Star Championship two weeks ago, started out her first round shooting two-under-par, 70. Both Kim and Choi are tied for 14th.

Including this tournament, the KLPGA Tour has three more remaining for the 2020 season. Following this week, the players will be heading to Incheon to compete at the Hana Financial Group Championship.

The second round of the SK Networks Seokyung Ladies Classic will continue in Jeju on Friday.