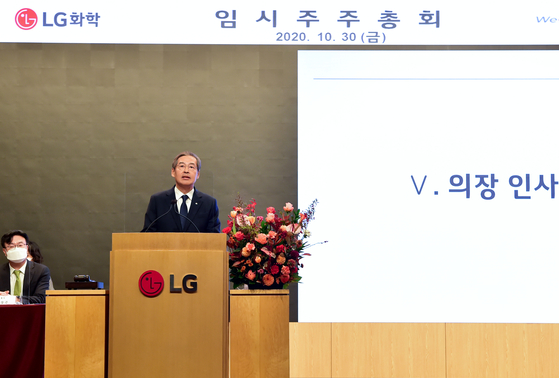 LG Chem's plan to spin off its battery business was confirmed during a shareholder meeting in Yeouido, western Seoul, on Friday.

Following the decision, the company, tentatively named LG Energy Solution, will be launched on Dec. 1. It will be 100 percent owned by LG Chem.

The move was approved despite the opposition of the National Pension Service, which holds a 10.2 percent stake in LG Chem as the second-largest shareholder.

According to LG Chem, 82.3 percent of voters agreed to the spinning off of LG Chem’s battery business, with 77.5 percent of shareholders taking part in the vote. LG Chem needed the approval of two-thirds of the shareholders that voted.

Forty percent of LG Chem’s investors are based outside of Korea, while 8 percent are domestic institutional investors and 12 percent retail investors.

LG Chem decided to spin off the battery business to secure investment, as the global competition in the sector continues to grow. Due to the need for continued investment in battery-making facilities to grow the company's production capacity, LG Chem’s debt ratio has exceeded 100 percent.

“The new entity will quickly and flexibly respond to the rapidly changing market and will have an improved market competitiveness through efficient and optimized management system for the industry,” said LG Chem in a statement Friday.

“Since it is a business that requires a lot of investment, if it spins off as a 100 percent subsidiary of LG Chem, investment can be secured in various ways at the right time. Based on that, the gap between [the new entity] and its competitors will become wider to help it maintain the global top spot.”

An increase in investment means LG Chem’s shares in the new company could decrease, but the company said it will hold at least a 70 percent stake to prevent the value of the parent company from declining. It also believes its advanced materials business, which makes cathodes, will generate a synergy effect with the new entity.

Market watchers expect LG Chem to secure investment for the new entity through an initial public offering (IPO), but it hasn’t yet confirmed whether the company will actually go public. Even if it goes public, it will take at least a year for the new company to be listed, according to Choi Sang-gyu, a spokesperson from LG Chem.

Following the spinoff, LG Chem’s goal is to become one of the top five chemical companies by raising the profitability of its remaining businesses, which are focused on petrochemicals, advanced materials and life sciences.

In the third quarter, LG Chem reported 570.39 billion won in consolidated net profit, up 315.8 percent on year. Its revenue inched up 8.8 percent during the same period to 7.51 trillion won.

The results were largely due to a solid quarter in petrochemicals, LG Chem’s oldest cash cow, and batteries.