The 25th Busan International Film Festival (BIFF) wrapped up its 10-day event “safely,” and that is what the organizers put the most significance on after hosting BIFF in the unprecedented times of the Covid-19 pandemic.

“We went out of our ways to take extra precautions and restrictions—to the point which could be called excessive—to abide by the social distancing guidelines,” said the chief programmer Nam Dong-chul at an online press event Friday. “A lot of people asked if [such precautions] were necessary, but we thought that we could not have hosted the festival if it weren’t for them.” 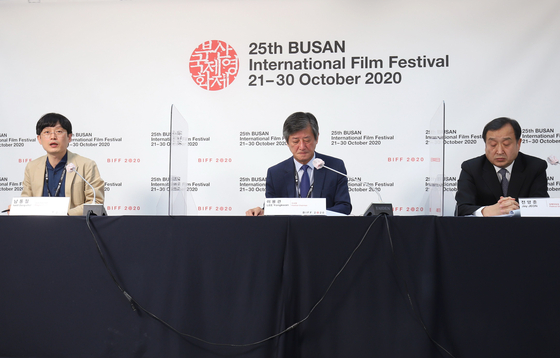 
The festival’s main events were offline screenings that took place in six theaters in Busan Cinema Center in which only 25 percent of the seats were filled per theater to keep up with social distancing guidelines. The ticket sales tallied 18,311.

“Considering the average of 180,000 tickets sold at the festival for the past 24 years, it may be a small number,” executive director Jeon Yang-jun said. “But considering the circumstances where we have hosted the event in a Covid-19 era in which we have strictly followed the social distancing guidelines, took preventive and untact measures, it’s a number that we can proudly present.

“But the occupancy rate of the seats was a record high 92 percent,” Jeon continued. “What we felt from that was that the audiences are very thirsty for films. Especially for outdoor screenings, nine out of 10 films were sold out.”

Apart from the film screenings, most of the events were moved online and conducted through Zoom—such as Forum BIFF, the Asian Contents Awards ceremony and workshops such as Master Class. A total of 45 panel discussions with the audience took place offline, while another 90 sessions were held online.

“The two aspects of this year’s festival that we want to highlight are first, the panel discussion in which we linked a Vietnamese theater with Busan Cinema Center to host the session creatively,” Jeon said. “And secondly, the audience had the opportunity to meet the maestro of documentary films, Frederick Wiseman, through Zoom. Even if we were able to host the festival normally, I don’t think it would have been easy to have the director visit us in person, so we were proud to give our Busan audience a chance to meet him.”

But the organizers admitted that the festival still had its faults. For instance, the individual press interviews in which the festival first accepted applications from the press to be conducted with the foreign directors over Zoom were mostly canceled as the staffs had difficulty reaching the interviewees in time.

“There are plenty of improvements that we need to make [including the interviews] but [to be frank] we lacked the confidence,” chairman of the festival’s board of directors Lee Yong-kwan said. “We could not fully use the online methods to our advantage because due to time and budget constraints, we were focusing on offline events and [we couldn’t fully decide] if the events should be online or offline.

“As I said before, what Covid-19 has brought us is a forceful transition [from the way film events were held before],” Lee continued. “It could not be helped, but we learned a lot from this year, and I strongly believe that now we have the confidence to upgrade the event next year by fusing the advantages of online and offline.”

As for the main awards, films “A Balance” by Japanese director Yujiro Harumoto and “Three” by Korean-Kazak director Pak Rulsan were the recipients of the New Currents Awards.

The Kim Ji-seok Award, a prize named after the festival’s executive deputy director which supports new Asian films and their rookie Asian filmmakers, went to two Iranian directors: “Drowning in Holy Water” by Navid Mahmoudi and “The Slaughter House” by Abbas Amini.

Korean actors Jisoo and Lim Seong-mi each took home the Best Actor and Best Actress awards for their films “Our Joyful Summer Days” and “Fighter.”

Along with the list of award recipients, it was announced that the 26th BIFF will take place from Oct. 6 to 15.

“The future of the physical opening of other major film events after BIFF, like Rotterdam, Berlin, Cannes, [still] remains unclear,” Jeon said. “It would seem that Covid-19 will still be with us next year, and we will prepare for next year’s festival based on this year’s experiences and the small lessons that we have learned from our achievements.”

The red carpet is back