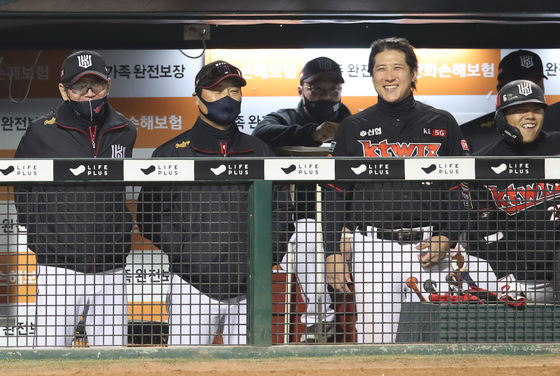 The KT Wiz players and coaching staff react to the news that the LG Twins lost 3-2 to the SK Wyverns on the sidelines of their game against the Hanwha Eagles at Hanwha Life Eagles Park in Daejeon. With the Twins' loss, the Wiz automatically finished second in the 2020 KBO regular season. [YONHAP]


The tumultuous 2020 KBO regular season came to a dramatic end on Friday night with the NC Dinos taking the title, followed by the KT Wiz, Doosan Bears, LG Twins and the Kiwoom Heroes taking the other playoff spots.

The Dinos finishing first comes as no surprise — the Changwon club had already locked it up on Oct. 25 — but the order of the remaining four teams wasn't decided until the very last minute.

Going into Friday's games there were eight different possible outcomes, and in the end what seemed the most unlikely is the one that came true. When the dust settled late on Friday night, the Bears were the only of the four teams in contention to pick up a win.

It was the Heroes and the Bears game that ended first. As the Bears defeated the Heroes 2-0, the standing started to shift. The Heores were the first team to finalize their spot in the regular season, at fifth.

The Bears made sure to make the best out of their final game. Not only did Raul Alcantara lead his club to the win, but he also managed to pick up his 20th win of the season. Alcantara had a dominant game, tossing eight scoreless innings. This allowed the Bears to advance to the postseason for a sixth-straight season. 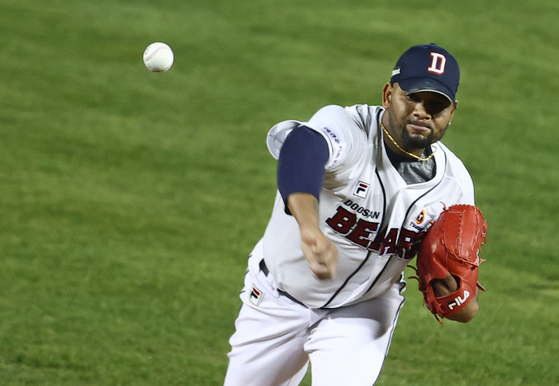 Doosan Bears pitcher Raul Alcantara throws a pitch during his team's 2-0 win over the Kiwoom Heroes at Jamsil Baseball Stadium in southern Seoul on the final day of the 2020 KBO regular season. [YONHAP]


With the Heroes secure in fifth, the Bears' future now rested on the shoulders of their oldest rivals, the Twins.

Over at Munhak Baseball Stadium in Incheon, the Twins had their last game of the season against the ninth ranked SK Wyverns. Despite losing their shot at the postseason, that didn't meant the Wyverns were going easy on the Twins. After a difficult year, the Wyverns managed to finish strong with a 3-2 victory.

This pushed the Twins down to fourth place, meaning they have to start their postseason with the Wildcard Series against the Heroes. It was quite a blow for the Twins as they were fiercely competing for the runner-up spot until just a few days ago.

With the Twins finishing fourth, this automatically allowed the Wiz to finish second in the regular season, even though they ended up losing 4-3 to the bottom-ranked Hanwha Eagles.

The Bears' dramatic jump to third place marks the second time in two seasons that the Jamsil club has made an impressive jump on the final day of the season. Last year the Bears suddenly jumped up to first place on the final day after beating the Wyverns on game difference.


Although the season is essentially over, one more game between the Dinos and the sixth-ranked Kia Tigers will take place on Oct. 31 due to a rain cancelation last week. This game will have no impact on the final standing.

Rounding off the table, the Lotte Giants finish in seventh place, the Samsung Lions in eighth, the Wyverns in ninth and finally the Eagles in 10th.

The final standing this season comes with a number of surprises, perhaps most noticeably the change of fortunes for both the Wiz and the Wyverns.

The Wyverns finished last season in second place after dominating most of the year. Just one year earlier in 2018, the Incheon team were the Korean Series champions.

This year the Wyverns have been plagued by problems, including a number of health scares related to the stress that manager Youm Kyoung-youb was under. Before the final game on Friday, the Wyverns announced that Youm has decided to step down after two seasons at the helm.

The Wiz, on the other hand, are heading into their first-ever postseason. Having joined the KBO in 2015, the Wiz finished in dead last three times before inching up to ninth in 2018 and sixth last year. This season they've shot up the table to second and enter the postseason as a serious contender.

While the Dinos have been a serious postseason contender in five of their seven seasons in the KBO so far, this is the team's first time taking the top spot and will give them their second shot at the Korean Series.

While the Twins and the Heroes are no strangers to mid-level playoff-spot finishes, the Bears coming in at third comes as a bit of a surprise.

The Bears have been the team to beat for the past few years, finishing in the top two for the last five years.

Looking at the final postseason standing, despite their lower rank, history suggests the Bears still have a chance.

Over the past five years the Bears have beaten the Dinos three times and the Heroes twice in the postseason. In fact, the last time any of this year's qualifying teams actually bested the Bears in a playoff series was back in 1998, when the Twins swept their Seoul rivals 2-0 in the first round of the playoffs.

The Twins and the Heroes have a bit of recent postseason history as well — last season the two teams faced each other in the first round of the playoffs, with the Heroes winning the series to head to the next round.

The KBO's postseason will begin on Nov. 1 with the Wildcard Series.

The Wildcard is a maximum two-game series, but the fourth-place Twins enter with a one-game advantage, making it likely that the series will be over in one game.

The Heroes face a serious challenge in the Wildcard Series, as only back-to-back wins will grant them a spot in the next round. Since the Wildcard was introduced in 2015, no fifth-ranked team has ever won.

Following the Wildcard, the first round of the postseason will begin on Nov. 4. The winner of the Wildcard Series will face the Bears in the three-game series to be played on Nov. 4, Nov. 5 and, if needed, Nov. 7.

The KBO season started late this year because of the coronavirus pandemic, with opening day pushed back from mid-March to May 5. As a result, the postseason is being played unseasonably late and the league has decided that the Korean Series will be played at Gocheok Sky Dome, the home of the Heroes and the league's only covered stadium, in western Seoul.