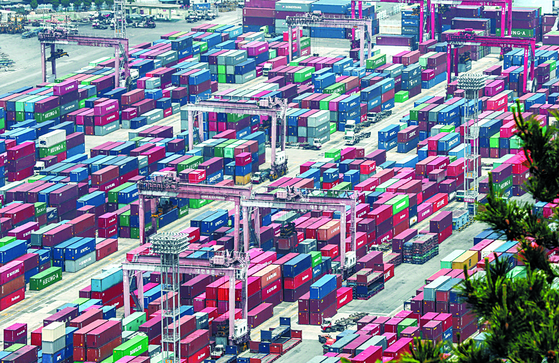 Containers are stacked at a Sinseondae port terminal in Busan on June 1. [YONHAP]

Outbound shipments came to $44.9 billion last month, compared to $46.6 billion a year earlier, according to the data compiled by the Ministry of Trade, Industry and Energy.

Imports moved down 5.8 percent to $39 billion, resulting in a trade surplus of $5.9 billion.

The latest figure roughly falls in line with market expectations. According to a poll by Yonhap Infomax, the financial arm of Yonhap News Agency, the country's October exports were expected to have decreased 3.12 percent on year.

The ministry attributed the decrease to the fewer number of working days in the month.

"Segments which suffered from the pandemic, such as displays, electronics, steel and auto parts, are slowly recovering, giving a positive signal on the recovery of exports down the road," Industry Minister Sung Yun-mo said in a statement.

But global trade is anticipated to face more jitters from the virus pandemic, which will result in weaker business sentiment and trade.

European nations have resumed travel restrictions and lockdowns as the number of new patients has increased at an alarming rate recently.

Over the past week, Europe added 1.5 million new patients, with some countries even feared to run out of hospital beds.

The United States has also reported more than 9 million new coronavirus patients in that time span, an increase of 1 million from two weeks earlier.

Around the globe, more than 45 million Covid-19 cases have been reported, according to the data compiled by Johns Hopkins University.

By sectors, exports of chips rose on year for the fourth consecutive month, advancing 10.2 percent to $8.6 billion. They took up roughly 20 percent of the country's overall exports last month.

The increase mainly came as major firms around the globe have expanded their investments in servers.

Exports of cars moved up 5.8 percent on year to $4 billion on the back of the robust sales of sports utility vehicles.

Outbound shipments of displays also gained ground for the first time in 26 months by advancing 5.2 percent on strong demand from high-end smartphones, including foldable models.

Overseas sales of computers edged up 5.3 percent as more people worked from home amid the Covid-19 pandemic. Those of home appliances rose 14.7 percent on improved sales of TVs.
Other major winners included biohealth products, which shot up 47.4 percent on year in October.

Exports of foodstuffs moved up 6.1 percent on stronger demand from Asian nations, the data showed.

Exports of petrochemical products, on the other hand, slipped 14.2 percent to $2.9 billion, and those of petroleum halved over the period due to the weak global oil prices.

Exports of ships moved down 22 percent on year to $1.4 billion due to the sluggish global economy.

By destinations, exports to China, the top trading partner, decreased 5.7 percent on year in October. The ministry attributed the decline to an eight-day holiday in China, which limited operations of its factories.

Shipments to the United States, in contrast, gained 3.3 percent, led by robust sales of chips and electronics.

The two countries accounted for 40 percent of Korea's monthly exports.

Sales to the European Union shot up 9.5 percent on chips and mobile devices, although the latest uptick in the number of Covid-19 cases is anticipated to weigh down the figure down the road.

Exports to Japan lost 19.2 percent over the period on weak facility investment, the data showed.

Outbound shipments of Southeast Asian nations slipped 5.8 percent over the period, as the prolonged economic fallout from the virus pandemic disrupted their business activities.

The country enjoyed a 4.5 percent rise in its outbound shipments in February, the first on-year rebound in 14 months, before it suffered full-fledged economic fallout from the pandemic.

Exports fell again in March as the number of Covid-19 cases around the globe escalated and the pace of decline further accelerated, plunging 25.5 percent in April and 23.6 percent in May.

Asia's fourth-largest economy extended its slump in exports to a sixth month in August, as the coronavirus continued to strain business activities around the globe, before rebounding 7.7 percent in September.

The pace of recovery may be moderate for the trade-driven economy because new waves of coronavirus infections recently gripped the United States and European nations, it added.