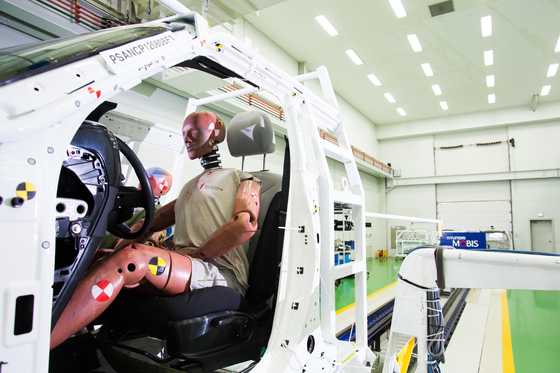 With its history of air bag production, Hyundai Mobis was the first company to design a roof-mounted air bag in 2017. The roof air bag system is able to cover the entire roof of the vehicle within 0.08 seconds.

The air bag system’s development was possible because of Hyundai Mobis’ experience and interest in tackling the increasing number of accidents involving passengers being ejected out of sunroofs, evident in the U.S. National Highway Traffic Safety Administration’s report from 2000 to 2015.

In 2013, Hyundai Mobis was the first company in Korea to commercialize a smart version of traditional seatbelts that automatically tighten when the vehicle takes a sharp turn or makes a sudden stop, ensuring passengers remain in their seats.

The combination of active and passive safety systems gained momentum with the successful development of the smart seatbelt, dubbed the Active Seat Belt.

The collaboration work with Hyundai Motors enabled Hyundai Mobis to jointly develop an incorporated passenger protection control device, which it plans to launch next year.

The control device functions as an all-in-one safety mechanism. When the external camera and radar sense the danger, the Active Seat Belt vibrates and tightens to indicate oncoming danger while an automatic emergency brake engages to slow down the vehicle.

Considering Hyundai Mobis was a late starter in comparison to its rivals, its exponential technological growth may seem surprising.

With its competitiveness in safety technology, Hyundai Mobis’ goal is to mark its presence in numerous global automobile companies.