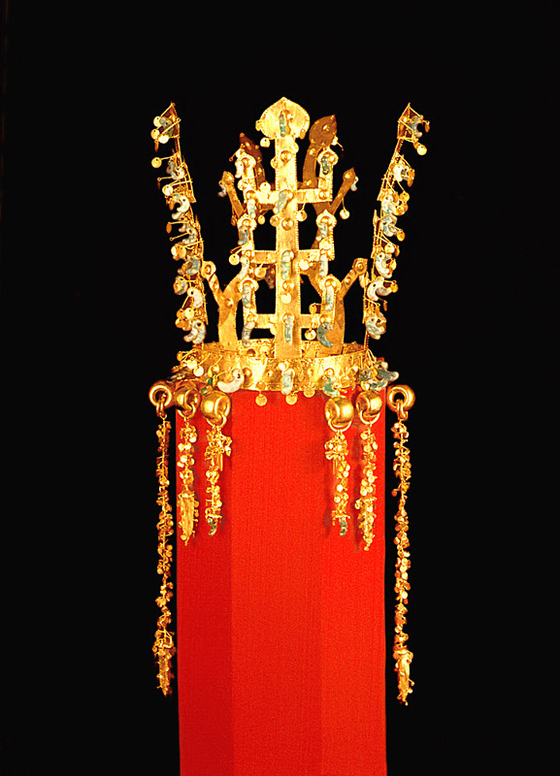 
The height of the golden crown is 27.5 centimeters (10.83 inches), and the length of the decorations that hang down are between 13 and 30.3 centimeters.

This golden crown is representative of the caps made during the Silla Dynasty (57 B.C. to A.D. 935).

Three decorations in the shape of Chinese letters, meaning mountain, are attached to the front of the crown.

Decorations in the form of deer horns are attached to both sides.

The 16 pieces of blue jade of the highest quality were set for the three Chinese characters, 9 pieces of jade to form the deer horns and 11 pieces on the head girdle.

The crown is studded with a total of 77 pieces of jade.

The balanced arrangement of gold decorations in the form of round shapes make a brilliant and lustrous golden crown.

Suhasik decorations are hung from the cap in thick rings, three pieces on both sides.

The longest of the suhasik decorations are on the outside and the shortest on the inside.

The ends of the suhasik are decorated in blue jade, like that of the head girdle, and golden decks formed leaves on the outside.

The head girdle and suhasik are assumed to belong to one another.

The issue is only questionable because the suhasik was discovered separately from the crown.

This crown is typical of the crowns worn during the Silla Dynasty, but is more ornate and is adorned with more precious jades.