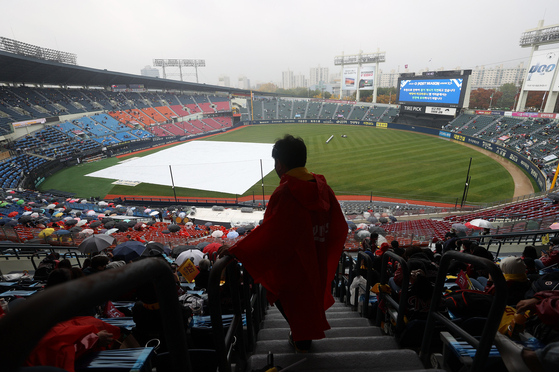 Fans wait for Game 1 of the Wildcard Series between the LG Twins and the Kiwoom Heroes to start amid pouring rain at Jamsil Baseball Stadium in southern Seoul on Nov. 1. The game was ultimately canceled and rescheduled for Monday at 6:30 p.m. [YONHAP]


Due to heavy rain, the KBO’s first Wildcard game between the LG Twins and the Kiwoom Heroes at Jamsil Baseball Stadium in southern Seoul got canceled on Sunday.

With the long 2020 KBO regular season finally ending on Saturday, the Wildcard Series between the Twins and the Heroes was scheduled to begin Sunday at 2 p.m. But with heavy rain continuously pouring down in Seoul, the KBO was forced to cancel the game after waiting for a little more than an hour.

The first game of the Wildcard Series has been rescheduled to Monday at 6:30 p.m. Both teams will have the exact same starters — Jake Brigham for the Heroes and Casey Kelly for the Twins.

While the Twins only need a win or a tie, the fifth-place Heroes have to win both games in the series to advance to the next round. No fifth-ranked team has won the wildcard round since it was introduced in the KBO in 2015.

If the Twins manage to knock out the Heroes in the first game of the Wildcard Series on Monday, the first round of the postseason, against the third-ranked Doosan Bears, will start as scheduled on Nov. 4.

However, if the Heroes manage to extend the series to the second game, the first game of the postseason will be pushed back by a day.

As the 2020 KBO’s regular season was postponed by more than a month due to the coronavirus pandemic, it has already been a long season. Given the cold weather, the second round and all subsequent postseason games will be played at Gocheok Sky Dome in western Seoul. The Heroes' home field, Gocheok is the only domed stadium in Korea.

This could create a disadvantage for the NC Dinos, who just picked up their first-ever regular season title to secure an automatic championship berth in the Korean Series, but won’t be able to play any of the games at their Changwon NC Park.