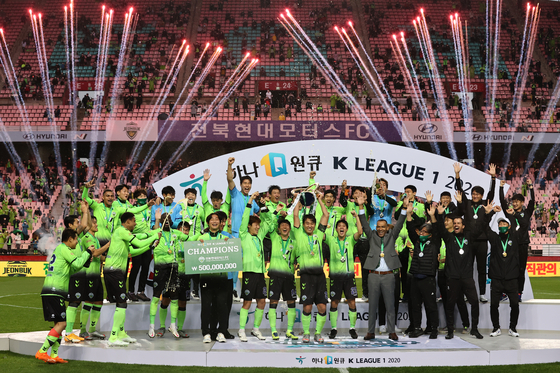 By defeating Daegu FC 2-0 in their last match of the 2020 K League season at Jeonju World Cup Stadium, Jeonbuk won the league title for the fourth consecutive season. Jeonbuk also became the only club in the K League history to clinch the regular season title for four straight years, and has also secured its eighth league title.

The final match against Daegu was dominated by their young player Cho Gue-sung, who scored both of Jeonbuk’s goals in the 27th and 40th minutes of the match.

This season, the K League was affected by the coronavirus pandemic, which delayed the start of the season and forced the league to reduce the number of regular season games from 38 to 27. Looking at Jeonbuk’s record this season, the team lost more matches than the 2019 season and wasn’t as dominant, but still managed a return to the top of the regular season standing by defeating Ulsan 1-0 on Oct. 25.

Last season, Jeonbuk secured their regular season title on the very last day. Ulsan and Jeonbuk finished the season with the same win-draw-loss and total points records, but Jeonbuk's superior goals scored and goal differential pushed the team ahead in the standings.

Jeonbuk’s last match of the season was also an unforgettable one for the retiring legend Lee Dong-gook, who played his last match as a professional player. This match marked the end of Lee’s 23-year career as a pro footballer.

Lee, who has earned the nickname "Lion King," appeared on the pitch wearing the captain’s armband for the match. Lee is a historic figure in the K League, holding the league’s career scoring record at 228 goals. He also holds the scoring record for the AFC Champions League, with 37 goals.

More impressively, of his 228 goals, Lee scored 164 of them while playing for Jeonbuk. 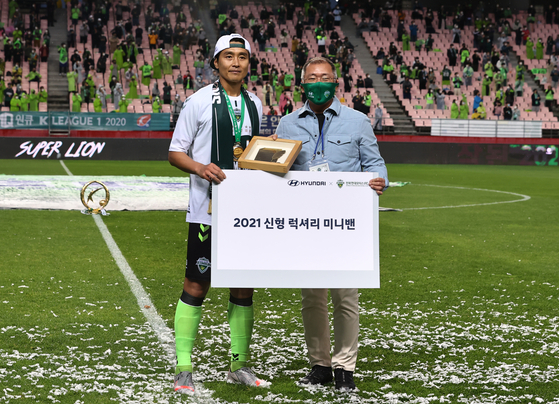 Lee Dong-gook, left, of Jeonbuk Hyundai Motors poses for a photo after receiving an appreciation plaque from Hyundai Motors Chairman Euisun Chung, right, during his retirement ceremony in Jeonju on Sunday. [YONHAP]


He made his debut in the K League with Pohang. Throughout his career with the club, Lee scored 38 goals in 102 matches. But when he attempted to play in the European league — one season with Werder Bremen and two with Middlesbrough — he failed to perform, and seemed to be stuck in a rut after he returned from Europe and played for Seongnam FC, scoring only two goals in 10 matches during the 2008-09 season.

But the K League star got his groove back after transferring to Jeonbuk in 2009. Since then, Lee has consistently scored more than 10 goals every season, and continued his streak of double-digit goals for 11 straight seasons. He scored nine goals throughout K League 1 matches and one in an Asian Football Confederation (AFC) Champions League match in the 2019 season.

At age 41, Lee was the oldest active player in the K League this season. Despite the limited playing time, Lee still managed to score four goals over the course of 11 matches for Jeonbuk.