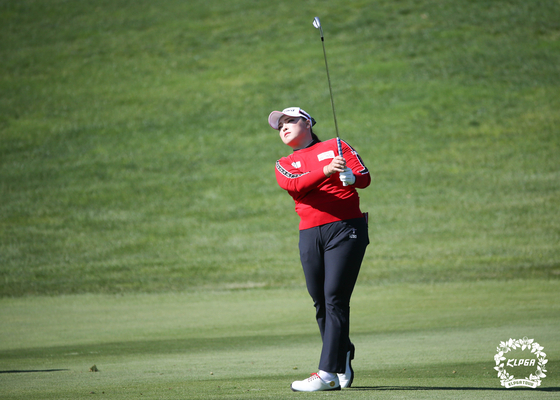 Jang Ha-na watches her shot during the final round of the SK Networks Seokyung Ladies Classic at Pinx Golf Club in Jeju on Sunday. [KLPGA]


JEJU — Jang Ha-na picked up her first win of the season at the SK Networks Seokyung Ladies Classic at the Pinx Golf Club in Jeju on Sunday.

By shooting one under par, 71, on the final day, Jang finished the tournament two shots ahead of the field.

Starting the final round tied for the lead with Choi Min-kyung at six under par, Jang didn’t get off to the best start as she added a bogey on the par-3 second. However, she quickly bounced back with two birdies — on the par-4 sixth and the par-4 eighth — on the front nine.

Although Jang added a bogey on the par-4 12th, she maintained her lead by adding a third birdie on the par-3 14th. With a birdie, Jang extended her lead by two shots ahead of the four players tied for runner-up.

Finishing the remaining holes with pars, Jang cemented her victory with a four-round total of seven under par, 281. Jang’s final round included three birdies and two bogeys.

“I had a lot happening in October,” Jang said. “I got injured a lot and my uncle passed away. But as I started a new month, I got off to a strong start. I’ve had a lot happening but overcame all that, and today I finally picked up a win. It makes today the happiest day for me.”

Despite finally ending a difficult October, she says that her final round wasn’t as easy.

“Overall, I had a really tough day,” Jang says. “Even when I looked at the score, I had quite a number of birdie chances but wasn’t able to make them. After I’d finished the round with so many difficulties [throughout the day], once the round was over, I felt relieved.”

Despite picking up two wins in the 2019 season, in the postponed 2020 KLPGA Tour season, Jang had a pretty slow start to a season in which she missed two cuts and withdrew one throughout 13 tournaments.

This week’s victory can be considered a great comeback for Jang after she withdrew from the prior tournament, at the 202 Huencare Ladies Open held just last week.

Despite the slow start, her performance this season wasn’t too bad. She’s had six top-10 finishes but took until almost the end of the season to pick up a win.

This is her 13th career win on the KLPGA Tour. Jang also played on the LPGA Tour, where she picked up five wins.

Looking at her career both on the KLPGA and the LPGA Tours, she’s been picking up wins for eight straight seasons, since 2012.

Despite the postponement of the 2020 KLPGA Tour season due to the coronavirus, this is already the 16th tournament of the season. As for this specific tournament, it's the 13th edition of the SK Networks Seokyung Ladies Classic.

A total of 102 players started out the tournament vying for the total prize money of 800 million won, with the winner taking home 160 million won. But the field was cut down to the top 60 players after the first two rounds.

Defending champion Choi once again fell short of picking up her first win of the season, as she finished the tournament eighth, at two under par, 286. She shot one under par, 71, on the last day.

Kim, who won the KLPGA Tour’s last major of the season at the KB Financial Group Star Championship, had another strong finish at tied for second by shooting two under par, 70, on the final day to finish the tournament at five under par, 283.

Park Min-ji, who also finished tied for second, received a daily-best score award by shooting four under par, 68, on the final round. Park’s round comprised five birdies and a bogey, and the final-day performance allowed her to make a big jump in the final standings, from tied for 10th to tied for second.

Rookie Ryu Hae-ran finished tied for ninth with a four-round total at one under par, 287. Although she didn’t win, tied for ninth place was good enough for her to secure her once-in-a-lifetime title, the KLPGA Tour’s Rookie of the Year award.

The KLPGA Tour will continue its season with the Hana Financial Group Championship at Sky 72 Golf & Resort in Incheon, from Nov. 5 to 8.

Jang will enter this tournament as a defending champion.