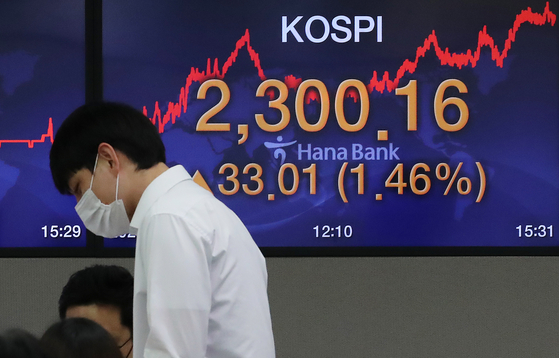 A screen shows the closing figure for the Kospi in a trading room in Hana Bank in Jung District, central Seoul, on Monday. [NEWS 1]


Seoul stocks rallied Monday ahead of the upcoming U.S. presidential election and the Federal Open Market Committee (FOMC) meeting. The won rose against the dollar.

Trading volume was moderate at about 665 million shares worth around 8.4 trillion won ($7.4 billion), with gainers outnumbering losers 683 to 165.

Amid the global Covid-19 resurgence and the U.S. election uncertainties, investors pinned hopes on a dovish signal from the FOMC, which has repeatedly said there is more policy room to support the world's largest economy.

Investors are paying keen attention to the results of the U.S. presidential election Tuesday (U.S. time).

"Volatility in the local financial markets is increasingly expanding ahead of the U.S. presidential election and probably will do so after the election too, depending on the voting results," Kiwoom Securities analyst Seo Sang-young said.

Earlier in the morning, Bank of Korea Gov. Lee Ju-yeol said the central bank may "take market-stabilizing measures in a timely fashion" if the election volatility turns out to be excessive.

The local currency closed at 1,133.6 won per dollar, down 1.5 won from the previous session's close.