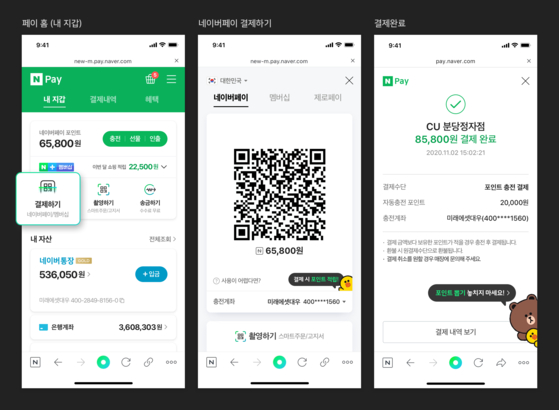 
Naver Pay can now be used in offline locations, potentially shaking up the mobile payment market.

This is the first time for the IT company to offer offline payment capabilities.

“As the so-called untact trend continues, demand is growing for contactless payment methods that do not require cards being physically exchanged between customers and the cashiers,” said Choi Jin-woo, vice president of Naver Financial, which runs Naver Pay.

Partnering with BC Card, the offline version of Naver’s payment service uses a QR code for purchases. The code is refreshed with each use. The service can be used at 70,000 offline locations, including coffee shops, AK Plaza department stores and GS Caltex gas stations.

With payment methods shifting from traditional credit cards to smartphones, transactions made through services of this time are growing annually.

The daily average purchases by mobile payment methods reached 174.5 billion won ($154 million) in 2019, which is a 44 percent increase from a year earlier, according to data from the central bank.

Despite its massive influence online, Naver, is a late-mover in the offline business behind market leaders Samsung Pay and Kakao Pay, according to analysts.

Naver is engaging in aggressive marketing. It announced point rewards to bring online customers to the offline world and narrow the lead of competitors.

Users of Naver’s CMA account or Naver Plus members can receive additional point rewards on top of points they already receive on their purchases. The company will also give out cash rewards ranging from 1,000 won to 5,000 won for purchases made at Naver Pay’s partnering brands.

The IT company is planning to connect credit cards to the payment service in the coming year.

“Many of our Naver Pay users utilize the payment method for online purchases, but rarely offline. We wanted to secure new customers to our platform, as well as give more options to existing ones,” said a spokesperson for Naver Financial.