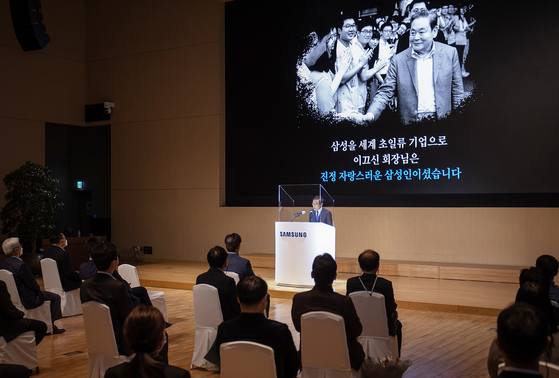 Samsung Electronics Chairman Lee Kun-hee is remembered during an event celebrating the company's 51st anniversary on Monday at the headquarters in Suwon, Gyeonggi. [SAMSUNG ELECTRONICS]


Samsung Electronics celebrated its 51st anniversary Monday but with the least possible fuss. Vice Chairman Lee Jae-yong, eldest son of the late Chairman Lee Kun-hee, did not show up.

The celebration at the company’s headquarters in Suwon, Gyeonggi, was the first major corporate event since the death of Chairman Lee last month.

Kim Ki-nam, a vice chairman who oversees Samsung’s semiconductor business, delivered a message emphasizing spirit that the patriarch left behind.

“We aim to transform into an industry-leading innovator based on the innovative mindset and the ability to resolve challenges ingrained in us, which is derived from Lee Kun-hee’s DNA,” Kim said, adding that the passing of the chairman was a great misfortune for all employees.

Kim also mentioned the importance of social responsibility and fostering a corporate culture built upon mutual trust and respect.

“Let’s lay a foundation for being a successful 100-year-old company in a sustainable way,” Kim said.

Around 100 participants including CEOs Koh Dong-jin and Kim Hyun-suk watched a video commemorating the company’s achievements this year, including its contribution to helping small- and medium-sized companies build smart factories for facial masks. It also mentioned record-high earnings in the third quarter.

In last year’s ceremony, Vice Chairman Lee shared his vision for a successful 100-year-old company in a statement that focused on employees’ imaginations and corporate responsibility. Lee stressed that the company’s goal was to develop technology in a way that can enrich people’s lives and benefit mankind and society.

“The path to being the world’s greatest is to share and grow, hand-in-hand,” he added.

Despite issuing that statement, he didn’t appear at the annual birthday party last year.

Lee has not attended the annual event since 2017, and many speculate that the ongoing trial in connection with a bribery scandal that led to the ouster of former President Park Geun-hye in 2017 is his reason for keeping out of the public eye.