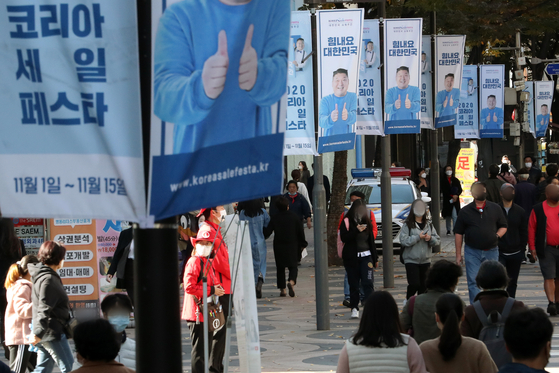 A street in Myeong-dong in central Seoul, filled with banners promoting the Korea Sale Festa that kicked off Sunday and will run throughout Nov. 15. [NEWS1]


The annual Korea Sale Festa kicked off this month with more than 1,600 companies taking part in Korea’s version of Black Friday.


The two-week event, which will run throughout Nov. 15 and marks its sixth anniversary this year, is designed to boost consumption and help businesses. It is a private sector event, but is promoted by the Ministry of Trade, Industry and Energy.

According to the organization committee Sunday, a record number of 1,633 companies will be taking part in the event including manufacturers of automobiles, apparel, household appliances and cosmetics. Last year, only 704 manufacturers took part.

Retailers are particularly enthusiastic about Korea Sale Festa this year, as they've had a difficult year with the Covid-19 pandemic.

Major retailers are expected to continue promotions with annual winter sales once Korea Sale Festa is over.

The promotions are particularly concentrated on discount mart chains instead of department stores.

“Major discount marts like Emart, Homeplus and Lotte Shopping announced up to 50 percent discounts on groceries, agricultural and fisheries products and apparel, while the discounts at major department stores is limited to around 10 percent,” said analyst Park Jong-dae from Hana Financial Investment. “Department stores aren’t as enthusiastic about Korea Sale Festa because they don’t have the stock they can sell like in the United States.”

“In the United States, Black Friday functions as a means for retailers to sell off all the stock regardless of the [brands’] name value, whereas in Korea, selling off stock is more of an opportunity for suppliers, not department stores. Discount marts, on the other hand, offer bigger promotions because they directly purchase the products from suppliers,” Park added.

Chevrolet’s Malibu, Trax and Equinox, sold by GM Korea are available at up to 10 percent off their usual sticker prices. Fifteen hundred units are on sale.

“As consumption has been repressed by the Covid-19 pandemic, the Korea Sale Festa this year is expected to generate a better response than last year,” said Prof. Seo Yong-gu, who teaches business at Sookmyung Women’s University.


“But due to the low discount rate and participating vendors and manufacturers, the performance of the Korea Sale Festa hasn’t been that successful over the past years," said Seo.

Calm before the Festa

Sale Festa may actually work this year as sentiment jumps