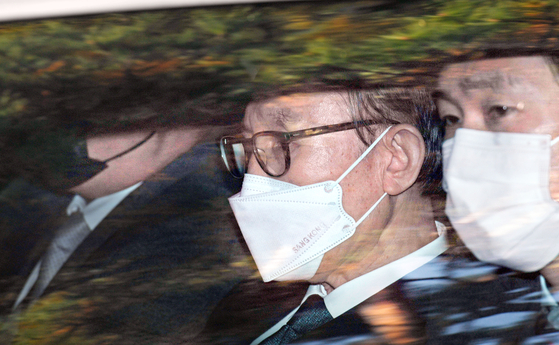 Former President Lee Myung-bak departs from his residence in Nonhyeon-dong in Gangnam District, southern Seoul, Monday afternoon, to be transferred to the Seoul Dongbu Detention Center in eastern Seoul after the Supreme Court last Thursday upheld a 17-year prison sentence convicting him in a corruption case. [KIM SANG-SEON]


Former President Lee Myung-bak was put behind bars Monday once again after the Supreme Court last week upheld a 17-year prison sentence convicting him of embezzlement and taking bribes.

Lee, 78, was transferred to the Seoul Dongbu Detention Center in Songpa District, eastern Seoul, at around 2:40 p.m. He was jailed 251 days after his release on bail in February. Lee had remained under house arrest since Feb. 25, and during the Supreme Court trial.

Lee earlier departed from his residence in Nonhyeon-dong in Gangnam District, southern Seoul, at around 1:47 p.m., and was flanked by aides. His residence was surrounded by crowds of reporters and civilian supporters and protesters, along with dozens of police officers assigned to keep order.

He was escorted by security officials and first checked in at the Seoul Central District Prosecutors’ Office around 2 p.m. before entering the detention center.

“They may imprison me, but the truth cannot be locked away,” he said in statement conveyed by his lawyer.

Lee previously served time at the Seoul Dongbu Detention Center in a 13.07-square-meter (141 square foot) single cell following his arrest on March 22, 2018. He spent a year in prison during the trial process, so he is expected to serve around 16 years.

His cell is slightly bigger than the 10.08-square-meter cell that former President Park Geun-hye is assigned to.

While Lee may be transferred to another prison, a Justice Ministry official said that taking into consideration the former president’s age and underlying health conditions, he may end up serving his remaining time at Dongbu. This was the case for predecessors like former presidents Chun Doo Hwan and Roh Tae-woo.

The top court on Thursday upheld the Seoul High Court’s rulings and sentence for Lee, convicting him of embezzlement and taking bribes from a conglomerate and sentencing him to 17 years in prison.

In February, the Seoul High Court sentenced Lee to 12 years in prison and fined him 13 billion won ($11.6 million) for taking bribes and embezzling money during his presidency, which ran from 2008 to 2013. Another five-year prison term was handed down for crimes committed before his term.

Lee was found guilty of embezzling 25.2 billion won from DAS, an auto parts company that prosecutors claimed was a conduit through which the former president amassed funds for his political and personal activities. DAS was legally registered in the name of his elder brother, Lee Sang-eun, but the court said the former president was its actual owner.

The Supreme Court also upheld graft convictions, including a charge that Lee had taken bribes from Samsung through DAS in return for issuing a presidential pardon to its late chairman, Lee Kun-hee. The former president was found guilty of receiving about 8.9 billion won from Samsung in 2009.