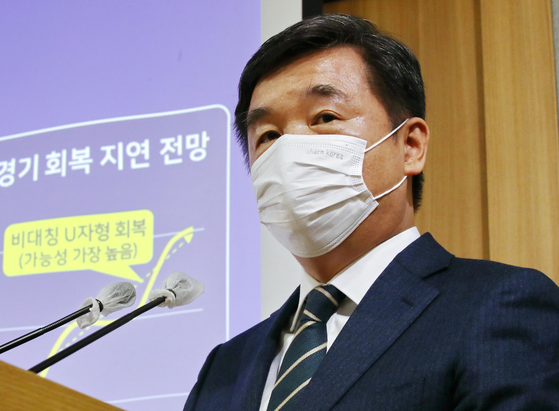 The Seoul Metropolitan Government unveiled next year’s budget worth over 40 trillion won ($35.2 billion) Monday, the highest amount that the Korean capital has ever allocated to city projects.

Acting Seoul Mayor Seo Jung-hyup said in a press briefing at City Hall that the city government has decided to spend nearly 40.05 trillion won next year, about 512 billion won more than this year.

Seo stressed that the budget will primarily be focused on responding to the coronavirus pandemic and preparing for the post-Covid-19 era, especially by strengthening city measures for preventing the spread of the virus and reviving the local economy.

The plan was submitted to the Seoul Metropolitan Council last Friday.

The Korean capital has also vowed to create more than 180,000 new jobs next year in the public sector, mostly consisting of work related to disinfection and childrearing for working parents. The city will also support private companies in training new recruits and helping young entrepreneurs start new businesses, ultimately aiming to create over 200,000 new jobs in the private sector.

Seoul has earmarked about 15 billion won to provide 1,000 unemployed young adults with internship opportunities to help them gain hands-on experience as well.

To help small-business owners reeling from the coronavirus pandemic, Seoul said it would help their online transition so customers can shop for their products on the internet. About 380 billion won worth of so-called Seoul Love Coupons will also be sold to the public, allowing Seoul citizens to spend cash at small businesses on special discounts.

For the first time ever, the Seoul Metropolitan Government also plans to dole out 300,000 won each to 137,000 students who are entering middle school and high school next year to help them get adjusted to their new curricula, which is expected to cost the city about 12.1 billion won.

Acting Mayor Seo shrugged off concerns about the city overspending, saying more real estate taxes were expected to be collected in 2021, which would lead to a higher tax revenue overall.