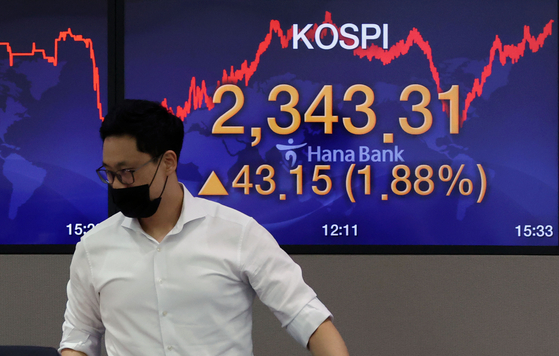 A screen shows the closing figure for the Kospi in a trading room in Hana Bank in Jung District, central Seoul, on Tuesday. [YONHAP]


Korean shares rallied Tuesday for a second consecutive day ahead of the U.S. presidential election. The won fell against the dollar.

The Kospi rallied after a 1.46 percent hike the previous session as investors bet that the stock market will build up gains after the U.S. election.

"Volatility from the election uncertainties is increasing in the local stock markets as the election draws near," said Shinhan Financial Investment analyst Choi Yoo-joon. "The election volatility is expected to continue throughout the week," he added.

The local currency closed at 1,134.1 won per dollar, up 0.5 won from the previous session's close.

Bond prices, which move inversely to yields, closed mixed. The yield on three-year bonds rose one basis point to 0.982 percent, and the return on 10-year bonds lost 2.1 basis points to close at 0.85 percent.