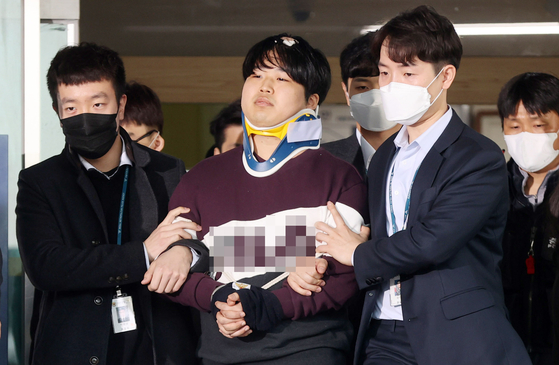 Cho Ju-bin, 25, and his alleged co-conspirators have been accused of blackmailing what appeared to be over 100 women and underage girls into providing sexually explicit and degrading photographs and videos of themselves. The explicit content was then allegedly sold to thousands of members of Telegram, an encrypted messenger app.

Police earlier this year said they have obtained the online usernames of some 15,000 members of the chat rooms, also referred to as the “Nth room,” who are believed to have paid for access to the pornographic content.

Prosecutors last month asked the Seoul Central District Court to hand down a life sentence for Cho. The court is scheduled to issue the first ruling on Nov. 26 at around 10 a.m.

For the co-conspirators, prosecutors have asked the court for prison terms of between 10 and 15 years, including for a 16-year-old suspect.

The contents of Cho’s letters haven’t been disclosed to local media, but the victims’ lawyers told reporters that Cho didn’t seem apologetic, and simply expressed how “wrongly victimized” he felt.

In one letter, Cho was said to have tried to set himself apart from Moon Hyung-wook, 24, who allegedly created the original Nth room, by saying he was essentially “a different person.”

One lawyer who claimed to have read all of Cho’s letters told the JoongAng Ilbo that it appeared Cho was trying to convince the court he’s “not a bad person,” adding that the suspect also criticized prosecutors.

The lawyers said the victims were preparing a counterargument to retort “each and every sentence” in Cho’s letters to the court.

Cho was seen crying during his trial last month, tearfully saying he wanted to put an end to his “evil character” and “walk the path of self-reflection.” At one point, Cho said, “I don’t think I’ve put much thought into the human dignity.”

During the same trial, Oh Seon-hee, a lawyer who represents several Nth room victims, read a letter on their behalf, saying it was preposterous how Cho wanted to “cover up” his actions with his claims of self-reflection.

“The assailant says he wants to use his talent to compensate the victims. That makes me laugh,” read part of the victims’ letter. “Cho Ju-bin and his conspirators should receive 2,000 years in prison so they can never repeat such an act."

Cho and other operators of the Nth room are believed to have primarily targeted young women and minors who had uploaded revealing images of themselves, approaching them online with the claim that police were investigating them for sharing sexual content.

After gaining their trust, the suspects allegedly obtained victims’ private information and then used it to blackmail them into providing increasingly explicit photos and videos, which were then shared on Telegram chat rooms to paying members.